WWF-India and Indian Army join hands to save the tiger 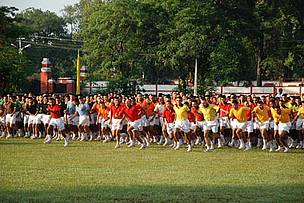 Over a thousand cadets of the IMA begin the 14-km run.
© WWF-India
The Indian Military Academy (IMA) and WWF-India organised ‘Roar of the Tiger Run’, an event to raise awareness of the endangered Indian tigers, on 31st May 2009. As part of the event a 14-km run was held around the IMA campus in Dehradun, the capital of Uttarakhand. Over a thousand cadets of IMA participated in the run to tell the world they want the tiger to be saved. Locals joined in to cheer them.

Apart from the run, there were colourful plays during the event, highlighting the need to save the tiger from extinction. Lt Gen RS Sujalana, AVSM, VSM, Commandant IMA was the Chief Guest and released a film on illegal wildlife trade. During his speech he committed to involve young officers to take forward such environment conservation events annually. The signature campaign, ‘Roar of the tiger’, which already has over three hundred thousand signatures, was displayed at the venue. Hundreds took part in this as well. A photo-exhibition with the theme 'Nature & Wild life’ by photographers Bhubnesh Bharti, Satpal Gandhi, Rajeev Mehta and Anjali Thapa was organised. The pictures of tigers in the wild by Mohammad Aslam Warisi drew immense support.

Winners of the run were presented with bicycles, sponsored by Mr. Ashwani Garg, a keen wildlife enthusiast from Haryana who traveled all the way to Dehradun to be a part of this event.

Summing up the overwhelming success of the event, Wing Commander (Retired), Mahesh Pandey, who represented WWF-India, said “I thank the Indian army, particularly Maj Vipul Deshwal, who provided us immense support to ensure the event was a grand success We had the youth rooting for the endangered tiger. It was specially touching to see children show up for this noble cause. Many put up interesting performances on stage. It was a good show of strength and solidarity to help protect and preserve our country’s national animal”.

For the past four years WWF-India has been jointly organizing major conservation fests with other institutions of Dehradun including Rashtriya Indian Military College, Doon, Welham School, Hiltons, Scholar Homes. In fact during the events organized in 2008, His Excellency, the Governor of Uttarakhand was himself the Chief Guest of one such event.

Over a thousand cadets of the IMA begin the 14-km run.
© WWF-India Enlarge 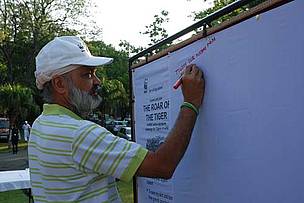 The Chief Guest signs ‘Roar of the tiger’, which already has over three hundred thousand signatures.
© WWF-India Enlarge