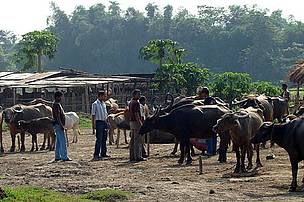 Some of the vaccinated cattle.
© NBL/WWF-India
Across India’s protected area network, countless people and their livestock neighbour wildlife. But this proximity also is the reason why the wildlife’s survival depends on the people near them. Danger of retaliation from locals against cattle depredation and spread of diseases from their animals to the wild ones is a reality. Hence, WWF-India and its partners are working to ensure a safe future for wildlife of protected areas.

On 23rd and 24th May 2009, WWF-India with support from authorities of Manas National Park (NP), ATREE, Blue Cross Society and some local NGOs, along with doctors from College of Veterinary Science, Khanapara, conducted a cattle vaccination camp in the villages surrounding the Manas NP. A world heritage site, Manas NP is spread over five hundred sq km. It lies at the foothills of the Himalayas, along the border with Bhutan in northeast India. Spectacular species like the tiger, elephant, pygmy hog, golden langur, wild buffalo and gaur are found here. The Indian rhino, which was wiped out from the park due to a political conflict, was reintroduced here by WWF-India and its partners last year. The park is a part of WWF’s North Bank landscape.

Some of the vaccinated cattle.
© NBL/WWF-India Enlarge