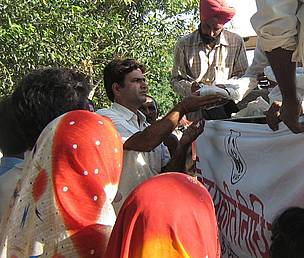 Ration being distributed to flood affected villagers
© WWF-India
New Delhi/ Palia (Uttar Pradesh): Flash floods in some rivers of the Terai, along the Indo-Nepal border, have inundated many grasslands of Dudhwa Tiger Reserve and its surroundings. Late seasonal rains upstream in Nepal have caused barrages to fill up beyond the danger level and the release of these waters has caused the floods. According to initial reports, about 30% of Dudhwa Tiger Reserve is currently under water. Some forest posts inside the park, particularly those of the Sathiana wildlife range, have been cut off from the outside world.
Impact on wildlife and surrounding communities:
The big picture of the impact on wildlife is yet to emerge. There are no reports of wildlife deaths as of now. Field staff from WWF-India’s Pilibhit and Palia offices are out to assess the situation and help the affected, in coordination with the forest officials.
According to Mudit Gupta, WWF-India’s Senior Project Officer at Palia town “There are high waters at many places due to the flooding of the Sarda and Soheli Rivers. Many of the forest personnel are stuck in the forest and have no access to food or drinking water. In fact, the town of Palia, as I speak now, is completely surrounded by rapid flowing water and is cut off from the rest of the country”.
He adds, “All the roads to Dudhwa National Park have been cut off. It is uncertain when the flood waters will subside and only then can we enter the park by the main roads. We can not predict when this will happen. Only after this can one enter the smaller roads of the forest to find out the damage and what needs to be done. Till then we have to make do supporting the people and staff by approaching them on boats.”
What WWF-India is doing:

Field staff of WWF-India are coordinating with the Forest Department to provide relief. The staff have reached different sites and set up relief operations. On ground, teams are distributing food and cooking materials like rice, flour, dal (grams) apart from candles and mosquito nets to the forest staff in the affected parts of the park, by reaching out in boats. Help also is being given to affected villagers and communities bordering the park, with the all important support of the Government – the forest department and district authorities. 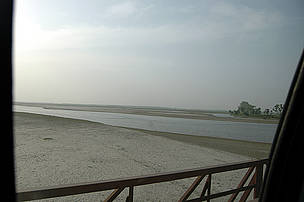