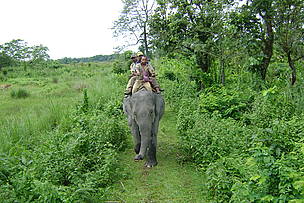 A haven for wildlife
Assam state is home to diverse habitats that harbor a rich variety of wildlife, but the same urgently need enhanced protection. The conservation issues here are being addressed by WWF-India through landscapes approach under the North Bank Landscape (NBL) and Kaziranga-Karbi Anglong Landscape (KKL) programmes, in partnership with the Forest Department, Government of Assam and various NGOs.

Within the NBL lies Manas National Park, a UNESCO Natural World Heritage site, while Pobitora Wildlife Sanctuary is one of the important rhino bearing Protected Areas of Assam. Manas National Park is located on the international border with Bhutan, along the foothills of the Himalayas. Pobitora Wildlife Sanctuary on the other hand, lies about 50 km to the east of Guwahati.

According to Debo Kumar Dutta, Senior Project Officer, NBL, “The doctors also went to the interior camps of the range to ensure maximum coverage. The needy were provided with appropriate medicines along with advice for care and precautions.” He said “The doctors talked about taking greater precautions on an emergency basis as the high Annual Parasite Levels detected may lead to an outbreak of malaria in an epidemic form in the area. The frontline staffs were advised to take precautions to prevent malaria. The patrol elephants were administered with drugs whereever required. Minerals and food supplements were provided to the mahouts to be administered by them as advised by the doctors.” “Plans are in place to cover the staff and patrol elephants of the remaining two ranges of Manas National Park,” he adds.

The Pobitora health camp was conducted under the supervision of Dr. Tonmoy Das and was led by Dr. Ramananda Das with the assistance of 4 experienced doctors and 10 paramedical staff from the hospital. About 100 people attended the camp. In addition to general health check-ups, tests were conducted to detect sugar level and malaria; ECG was also done on some patients. Free medical treatment was provided to those with critical illness. It was organised with support of International Hospitals, Guwahati in association with the Assam Forest Department and Pobitora Conservation Society.

These health camps will go a long way in securing the lives of Assam’s wildlife and their protectors - the forest staff. 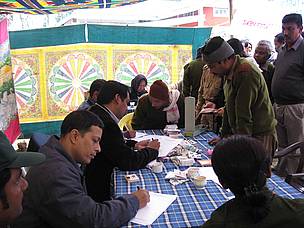 An elephant being treated at the Manas health camp.
© Amit Sharma/ WWF-India Enlarge