Run for the tiger 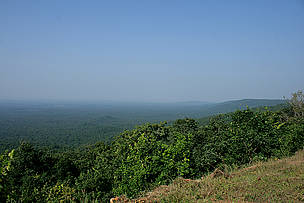 A motivated group of more than 600 people, including children and youth, committed to support protection and conservation of tigers in the Satpura-Maikal landscape (SML) was created as a result of a marathon to support tiger conservation. The marathon was jointly organised by WWF-India’s SML team and ‘Sach bol’ group of Vananchal Nature Club, Balaghat District on 19th September 2009.

The marathon generated awareness among the local population and garnered public support for protection and conservation of the tiger in central India. The event also developed a team of dedicated volunteers to support wildlife and forest conservation efforts in and around the Kanha Tiger Reserve.

According to Shivaji Chauhan, Senior Landscape Coordinator of WWF-India’s SML, more than 200 runners participated in the marathon. He said, “Our entire SML field team participated and completed the 32 km run, to motivate other participants to complete the run!”

Before the marathon was flagged off, an oath was administered to all the participants, staff of the Forest Department and the inhabitants of Baihar Township (Madhya Pradesh) who attended the program. The oath bound all those present with an assurance to ‘Volunteer for Tiger Conservation’.

WWF-India supported the marathon by awarding cash prizes of Rs. 10,000, Rs. 5000, Rs. 3000. Certificates were given from WWF-India to the participants who stood first, second and third, respectively.

Put together, around 17% of the world’s tigers are found in the SML. Two major corridors in the landscape: Kanha – Achanakmar and Kanha – Pench are currently the focus of WWF-India’s intensive efforts to strengthen tiger conservation. It is very important to retain the trust and support of the local communities to ensure the tiger has a safe future. Events like these will go a long way in doing so.