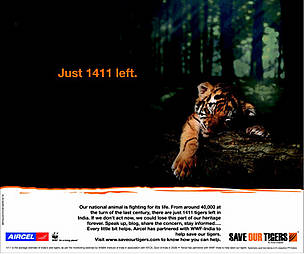 WWF-India has partnered with Aircel, one of India's leading telecommunications companies in the launch of 'Save our tigers' media campaign. The campaign was  launched on Saturday, 30 Jan 2010, across the nation simultaneously on TV, on-line, in print as well as on radio featuring India's cricket captain MS Dhoni, ace footballer Bhaichung Bhutia, Tamil movie star Suriya and ‘Stripey’ a tiger cub. It is turning out to be the largest ever campaign, in measurable terms, in support of India's wild tigers.

Unprecedented support
Overnight, the campaign has brought to the fore the conservation zeal of thousands of ordinary Indians. There has been a wave of volunteers coming forward to save the tiger. While some have turned cyber warriors many others have gone beyond meetings and blogs, offering Aircel and WWF-India to work for tigers. From celebrities and movie stars wanting to contribute their time to students wanting to rough it out in the field, the campaign has drawn in people from all walks of life.

In a little over a week since its launch, it has drawn over 75,000 people, who have signed up on the campaign website www.saveourtigers.com

Volunteer engagement
WWF-India has planned various exciting activities in which volunteers can be involved. Volunteers will be engaged based on their geographical areas, area of interest and skills they possess. Accordingly, we are finalising an action plan to involve individuals in groups for WWF-India’s work in Tiger landscapes across India. The plan will have specific areas of engagement. All volunteers who have reached out to us with specific requests are being contacted shortly with more details.

2010 is also the Year of the Tiger. WWF-India will build on the campaign momentum to create awareness amongst various sections of Indian society towards the threats faced by wild tigers and WWF’s efforts to conserve them as well as involve the masses in doing so.

Please write to saveourtigers@wwfindia.net to know how you can help.