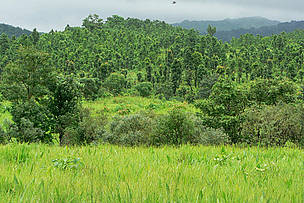 Tucked away in the Mayurbhanj district of Orissa, on the northern most edge of the Eastern Ghats, lies the scenic Similipal Tiger Reserve. With an undulating terrain that gives rise to many waterfalls and hills, this tiger reserve is home to a wide variety of flora and fauna, including the tiger, elephant and many species of orchids.

In the recent past, the tiger reserve has suffered damage due to political violence in the region. But with the efforts of the Orissa Forest Department, the tiger reserve is slowly regaining its past glory. Efforts are being made to boost the morale of the field staff by providing support to them. In this direction, WWF-India donated two pick up trucks (Bolero Campers) on 13 March 2010. These vehicles will help the staff here to navigate through the tough terrain and boost anti-poaching surveillance.

The vehicles and field gear were received by Mr. H.S. Upadhyay, Field Director of the Similipal TR-cum-Conservator of Forests, Baripada. Speaking on the occasion, he said, “I thank the World Wide Fund for Nature-India for their generous support which will help the reserve’s staff to step up anti-poaching surveillance.”

The support also included 250 LED torches, 250 pairs of field shoes, 250 sleeping bags and 100 water filters for the forest camps. This is one of the largest supports ever extended by WWF-India to a tiger reserve.

The vehicles and field gear were handed over by Dr. Diwakar Sharma, Associate Director of Species Conservation Programme, WWF-India, who hoped that WWF-India’s support would help regain Similipal’s former glory and this way contribute effectively to tiger conservation in Orissa as well as India. 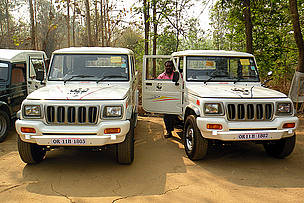