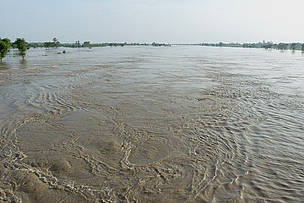 Background
Located in the northern Indian state of Uttar Pradesh along its border with Nepal, Dudhwa Tiger Reserve has been prone to flood water for many decades. Although these floods are necessary for the renewal of its unique grassland ecosystem that supports a viable population of swamp deer, over the last few years the rising intensity of floods has begun to pose a serious threat to the tiger reserve. Bridges and roads that connect the park with outside are either damaged or blocked and the forest personnel get stuck in the floodwater. In the floods that hit the park in October last year, they had a tough time as their movements were restricted and they had limited or no rations in the period when they were cut off from the outside world. WWF-India had then supplied rations to the forest department daily wagers to ensure the routine monitoring and protection work in the tiger reserve was not hampered.

Early floods
This year heavy rainfall started in early July and increased the possibility of flooding. Heavy rains lashed the area between 18 and 20 July and the local administration issued a flood alert. Parts of the Sathiana and South Sonaripur Ranges inside the tiger reserve were flooded in the rising water. As a precaution, WWF-India once again supplied essential flood relief for daily wage staff belonging to all ranges of Dudhwa National Park and Kishanpur and Katerniaghat wildlife sanctuaries, numbering 472 in total.

On 22 July, Mr. Sanjay Kumar Pathak, Deputy Director of Dudhwa Tiger Reserve, flagged off a vehicle carrying flood relief. Each daily wager was provided with 10 kilos of wheat flour, 10 kilos of rice, 10 kilos of potato, 2 kilos of pulses, 1 kilo of mustard oil, 1 kilo of salt, 2 packets of candles and 1 pack of matchboxes. WWF–India’s staff from Palia and Katerniaghat field offices distributed the rations. This ration is enough for one person to sustain himself for the duration of the floods.WWF-India also supplied spare batteries for the 250 torches that were distributed with the flood relief to the field staff in 2009.

WWF-India also supported elephant patrolling during the floods by providing 500 kilos of wheat flour, 50 kilos of jaggery, 20 kilos of salt and 5 kilos of mustard oil for the pachyderms.

The Field Director of Dudhwa Tiger Reserve, Mr. Shailesh Prasad said, “I thank WWF-India for the timely support. During flooding it is very difficult for the staff to visit procure food from the market. Therefore patrolling suffers.” Mudit Gupta, WWF-India’s Senior Project Officer added, “The timely distribution of flood relief is meant to ease the hardship of the daily wage staff, thereby boost their morale and help them concentrate on their daily tasks - monitoring of the tiger reserve and wildlife.” 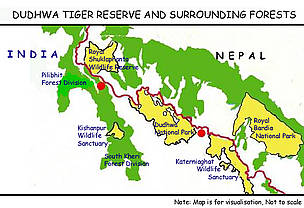 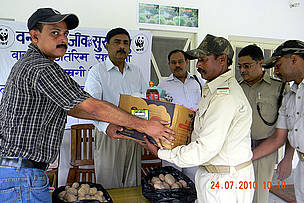