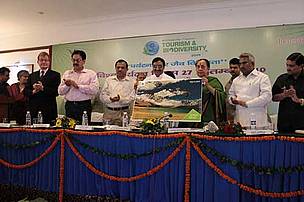 Green Hiker being launched by the Chief Minister and Governor of Uttarakhand (centre)
© WWF-India
Dehradun: On the occasion of World Tourism Day, the Government of Uttarakhand and GTZ joined hands with WWF-India and its Green Hiker campaign, to raise public awareness about the role of sustainable tourism in the conservation of biodiversity. This theme was selected since 2010 is also the International Year of Biodiversity and the United Nations World Tourism Organisation’s (UNWTO) has decided to celebrate World Tourism Day under the theme ‘Tourism and Biodiversity’.

WWF-India’s Green Hiker campaign, already running in the Himalayan states of Jammu and Kashmir, Himachal Pradesh, Sikkim and Arunachal Pradesh was launched on Monday, September 27, 2010 in Dehradun. The launch took place during the World Tourism Day celebrations organised by the Ministries of Forest and Tourism, Government of Uttarakhand.

Dr. Sejal Worah, Programme Director, WWF-India introduced the campaign through a presentation, highlighting tourism impacts in the high altitude Himalayan region. She explained that the Green Hiker aimed at mitigating these threats through raising public awareness and changing tourist behaviour when they visit these areas. The campaign was officially launched with the Governor and the Hon’ble Chief Minister unveiling the Green Hiker poster. The one minute, 18 second Green Hiker animation film called ‘Journey of a Green Hiker’ was publicly screened for the first time in Uttarakhand and was highly appreciated by the participants.

Commenting on the great natural wonders that Uttarakhand has to offer, Shrimati Alva said, “Green tourism needs to become a peoples’ movement. There is need for greater coordination and eco friendly measures to preserve the natural ecosystem that makes Uttarakhand so special. I would like to congratulate the Green Hiker team on this effort to help conserve what we are fast losing. It’s about time we started doing something about the damage caused by unsustainable tourism.”

“Everyone should come together and coordinate their efforts to make tourism in the beautiful state of Uttarakhand more green, to keep it the way it is,” said Dr. Pokhriyal while addressing the audience.
Besides this, WWF-India simultaneously participated in the ‘Explore Rural Uttarakhand’ Exhibition at the same venue, exhibiting its work and disseminating information on Green Hiker. Also participating were organisations like Mountain Shepherd, Mahseer Conservancy, Drishtikone, Due North, Samar Foundation, Uttarakhand Tourism Development Board and other community based organisations showcasing examples of responsible tourism in the state.

Biodiversity is a key tourism asset and fundamental to its sustained growth. Healthy and pristine ecosystems form the cornerstone of thousands of tourist enterprises and products worldwide, attracting millions of tourists. As an important source of income and employment, tourism has everything to gain from protecting biodiversity and natural ecosystems. Sustainable tourism can allow tourists to enjoy the natural beauty of fragile ecosystems while at the same time, ensuring that it is respected and left clean and intact. This is the message of the Green Hiker.