Translocation of wild Rhinos carried out in Assam, India 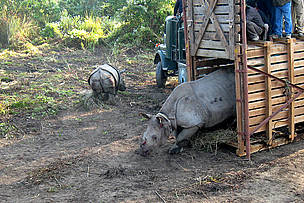 A year-long process of procuring tranquilizing drugs, radio-collars and other equipment and many meetings at various levels finally had its success during the end of December 2010. Two female Indian rhinoceros (Rhinoceros unicornis) – a mother and a juvenile, were translocated to Manas National Park today from Pobitora Wildlife Sanctuary in Assam, under the aegis of the Indian Rhino Vision 2020 (IRV 2020) programme. A specially trained team released the two rhinos in the Basbari range in the central part of the Manas NP. These were captured through chemical immobilization in Pobitora on 28 December 2010 and transported in specially designed crates in two different trucks to Manas, under strict security and veterinary assistance. They will be observed very closely for the next few months. The Indian rhinoceros is currently listed as a vulnerable species by the International Union for Conservation of Nature (IUCN).

The IRV 2020 is a joint programme of the Department of Environment and Forests – Government of Assam, WWF-India and the International Rhino Foundation (IRF) with support from the Bodoland Territorial Council, US Fish and Wildlife Service and the local communities. The programme’s vision is to increase Assam’s rhino population to 3000 by 2020, which will be done by wild-to-wild translocation from Kaziranga National Park and Pobitora Wildlife Sanctuary to Manas and Dibru Saikhowa National Parks as well as Laokhowa and Burachopari Wildlife Sanctuaries. Assam accounts for the largest population of Indian rhinoceros. Though rhino numbers in the state have grown from 2000 in 2005 to over 2200 in 2009, more than 90% of these live in just one Protected Area, which is the Kaziranga National Park. The IRV 2020 programme aims to secure the long term survival of wild rhinos in Assam by expanding their distribution to reduce risks like disease, in-breeding depression and mass mortality.

Under this programme, the first phase of wild-to-wild translocations was carried out in April 2008 when two male rhinos were re-introduced into Manas National Park from Pobitora Wildlife Sanctuary. The current translocations that ended today started on 27 December and are a part of phase two of the translocations. During this second phase, a total of eighteen rhinos are proposed to be translocated from Pobitora Wildlife Sanctuary and Kaziranga National Park to Manas National Park in batches. During the current operations, the Pobitora Wildlife Sanctuary was closed for visitors to ensure minimal disturbance to the rhinos. The entire operation was carried out under strict vigilance. Like the rhinos translocated earlier, the adult female has been fitted with a radio-collar, and along with the juvenile, it will be monitored continuously through the next year by the staff of Manas NP with support from WWF-India.

WWF-India has been preparing the ground for this second phase of translocation since the past year and assisted the Department of Environment and Forests – Government of Assam. WWF-India’s field teams at Manas National Park have been monitoring the rhinos there and have been working with the Park authorities to increase security to ensure protection to the released rhinos. Local communities have also been WWF-India’s partners in the overall conservation efforts around Manas. WWF India has been supported in this effort by IRF, the WWF International AREAS programme and WWF US. .

IRV 2020 provides a roadmap for long term conservation of the Indian rhino in Assam, charted in June 2005 by the Government of Assam constituted Task Force for Translocation of Rhinos within Assam, commonly referred to as the Rhino Task Force. This body incorporates conservationists from diverse backgrounds, from both the government as well as non-governmental sectors.

According to Dr. Dipankar Ghose, Head, Eastern Himalayas Programme, WWF-India “The present rhino translocation is very important to initiate the next round of translocations in Assam. It has strengthened the confidence of all teams involved. Given the excellent support received from the state Forest Department and the administration, this is also a landmark achievement for active management of species involving different stakeholders". 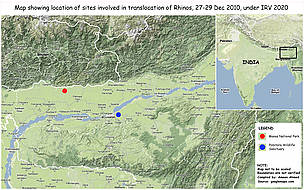