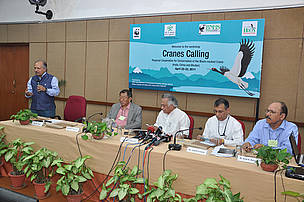 The workshop was inaugurated on April 22 in celebration of Earth Day, observed all over the world.

The workshop was attended by several government officials from the Ministry of Environment & Forests, NGOs working on conservation issues like Birdlife International and Wetlands International, environmentalists and bird experts from India, Bhutan and China. Also present at the occasion were the Chief Guest, Mr. Jairam Ramesh, Hon’ble Minister of Environment & Forests, Government of India and Dr. Dasho Paljor Dorji, Chairman, National Environment Commission of Bhutan and Founder Patron, RSPN Bhutan.

The primary objectives of the workshop were to facilitate knowledge-sharing and information exchange among conservation experts on the Black-necked Crane, to foster international cooperation among India, China and Bhutan, and to explore the opportunities of community exchange programmes between these countries. The Black-necked Crane is listed as ‘Vulnerable’ in IUCN’s Red List of Threatened Species and represents the fragility of this high altitude ecosystem.

WWF-India is working on the conservation of Himalayan high altitude wetlands and its flagship species like the Black-necked Crane, snow leopard and Bar-headed Goose, which are threatened by increasing anthropogenic pressure, unplanned development and unsustainable tourism.

The workshop provided a platform for presentations and collective discussions on the status, threats and conservation efforts made so far, as well as, the potential strategies to safeguard migratory birds like the Black-necked Crane during their breeding and nesting seasons. This also included habitat modeling, mapping of migratory route and flyways and formulation of new action plans and recommendations. The concerns and conservation plans adopted by the Indian States of Ladakh, Sikkim and Arunachal Pradesh, and countries like China and Bhutan were also discussed.

At the inaugural session of the workshop, the Chief Guest, Mr. Jairam Ramesh awarded the first ‘Regional Crane Conservation Award’ to Mr. Phurpa Wangdi for his 35 years of committment towards Black-necked Crane conservation in Bhutan. On the occasion, he said, “Endangered bird species like the Black-necked Crane, deserve special attention. This, not only because of their significance in the larger order of nature, but for the immense opportunities for regional and international cooperation that they bring in their fold. These migratory birds recognise no boundaries hence it becomes all the more crucial to safeguard their shared habitats for the well being of the species and the ecosystem.”

“The Himalayan high altitude wetlands are crucial breeding grounds for migratory birds like the Black-necked Crane found in small numbers and very restricted areas. To protect these magnificent birds, it is imperative to protect their habitat. Culturally, this bird not only represents fidelity but has now become a fantastic symbol of international cooperation and peace between every country it befriends,” said Mr. Ravi Singh, Secretary General and CEO, WWF-India.

Dr. Asad Rahmani, Director, BNHS stated that, “The Black-necked Crane is globally Vulnerable and is a flagship species of the high-altitude marshes of Ladakh and the Tibetan Plateau. It is also a symbol of tolerance shown to wildlife by Buddhist religion and culture. Although the number is around 11,000, it is threatened in the long-term by climate change, drying up marshes, increased human settlements and predators like domestic dogs. In Ladakh, five Important Bird Areas (IBAs) have been recognised where the Black-necked Crane is found. These IBAs need proper community- and nature-friendly conservation actions that benefit both the local communities and cranes. The Bombay Natural History Society and BirdLife International support conservation initiatives taken by WWF-India for this species.”

The workshop recommendations focused on the requirement of more regional cooperation in order to conduct coordinated surveys and scientific research such as telemetry studies which will help us learn more about the habitat ecology of the species, the need to standardize data collection, and a thrust on education and awareness for different stakeholders. It is also envisaged to initiate the development of a Single Species Action Plan under the Convention on Migratory Species (CMS) and the East Asian – Australasian Flyway Partnership. Further, Bhutan and India were encouraged to join this partnership. 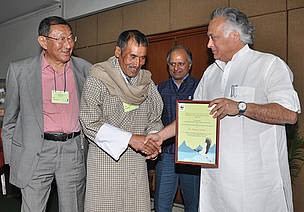 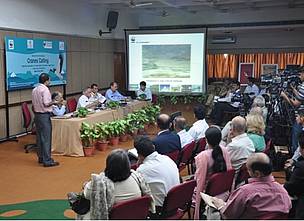 Pankaj Chandan, WWF-India, who has been working on the conservation and management of this species for past 10 years , giving the regional overview on the species
© WWF-India Enlarge