Helping the tigers of Kopijhola 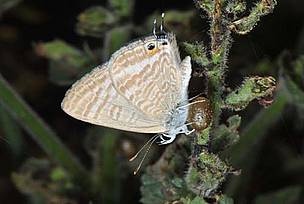 The importance of corridors
Tigers need space due to their territorial nature. Sub-adult tigers are forced to move away from their birth ranges to adjacent protected areas to establish new terrritories. In this process they make use of available corridor forests that connect protected areas. The Kanha-Pench corridor covering an area of 16,000 sq km in Central India offers such crucial connectivity between the two major tiger source populations in Kanha and Pench through extensive tracts of forests. Together with the Kanha-Achanakmar corridor in Chhattisgarh, these forest tracts form one of the most important tiger habitats in the world. Such forest corridors offer much needed contiguity between different tiger populations, thereby preventing their isolation as well as subsequent loss of genetic vigour, and help in long term tiger conservation.

Conserving the vital corridor
Within the Kanha-Pench corridor, the South Central Railway proposed the diversion of approximately 70 hectares of forest land for conversion of the current Nainpur-Balaghat narrow gauge section to broad gauge. A proposal for upgradation of the existing Nainpur-Balaghat state highway that is almost parallel to the railway line also exists. To ascertain the potential negative impacts of these expansions on the tiger habitat, a site inspection was carried out by tiger biologist Joseph Vattakaven, Senior Coordinator, Tiger Conservation, WWF-India. The findings were published in the report 'Fragmentation Threat in the Kanha-Pench Corridor' and presented to National Tiger Conservation Authority (NTCA). WWF-India also urged the MP forest department through Dr. H.S. Pabla IFS, the Principle Chief Conservator of Forest (WL) & Chief Wildlife Warden and Mr. L.A.K. Choudhary, CCF Seoni Circle of Madhya Pradesh to protect the natural forests in the corridor against conversion to other land uses.

The Kopijhola Forest Block
The Kanha-Pench corridor is made up of different forest administrative blocks. One such important forest block is Kopijhola-Sonekhar, covering an area of 182 sq. km. The Kopijhola village has a population of about 450 people who depend on the forests for livelihood. In spite of the human settlement, the area around Kopijhola has good bamboo forests, mixed forests and teak plantations.

A survey on tiger occupancy by Wildlife Institute of India and WWF-India recorded the presence of tiger in the Kopijhola-Sonekhar block, including a direct sighting. This forest is also home to other wild animals like leopards, hyena, wild dogs, sambar, four-horned antelope, spotted deer and palm civet, to name a few. Subsequent to the tiger occupancy survey, WWF-India’s Central India field team consisting of Senior Project Officers-Sanjay Thakur and Jyotirmay Jena undertook a rapid survey of the Kopijhola Forest Block to assess its biodiversity and current status. During the survey, apart from megafauna, the team also recorded 30 species of butterflies and 57 species of birds. River Hirri flows across the forest block and has water availability even in summer. This availability of a perennial water source has resulted in the presence of sufficient prey base for tigers.

But worryingly though, the team came across logging activities in this forest block and adjoining beats by the Madhya Pradesh State Forest Corporation (MPSFC), an enterprise of the Forest Department that extracts forest timber and other forest produces to be sold commercially. Nearly 5600 hectares of forest had been handed over to the Corporation in 2009 and 2010. In addition, the whole Kopijhola-Sonekhar forest block was proposed to be handed over to Forest Corporation to start commerical production operations.

The interventions
As this transfer would have led to a rapid loss of the forests in the block and fragmentation of the Kanha-Pench corridor, WWF-India’s team presented the results of the tiger occupancy survey and the rapid survey to Mr. L.K. Chowdhary, IFS and Chief Conservator of Forests (CCF), Seoni Circle, Madhya Pradesh Forest Department and recommended that this handover be stopped. Not only did the CCF act on the survey results and WWF-India’s recommendations, he also put an end to all existing logging activities in it. This decision will help in keeping the forest block intact.

Going forward, WWF-India is working with the Forest Department to ensure the activities of MPSFC are limited to the existing plantations and all new felling and planting activities are regulated throughout the Kanha-Pench corridor. This will maintain the connectivity between the important tiger populations of Kanha and Pench, thereby contributing to the disperal of tigers and long term survival of their populations in Central India’s forests. WWF-India is also helping the Forest Department in preparation of wildlife management plans for the forests in the Kanha – Pench corridor.

A butterfly from the Lycanidae family photographed in the Kopijhola forest block
© S. Thakur/ WWF-India Enlarge 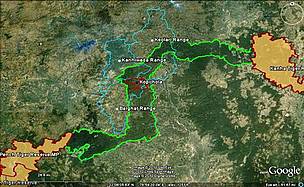 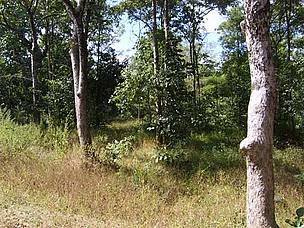