Encounter with a rare mama bear and cub 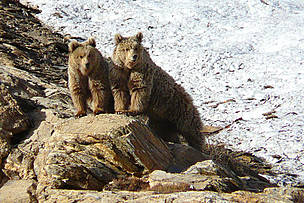 Think of a teddy bear and one conjures up images of cute and adorable toys. Are bear babies in the wilderness cute too? “Kind of, yes”, says Aishwarya Maheshwari, Senior Project Officer with WWF-India’s Snow Leopard Project underway in the district of Kargil in the Ladakh region of Jammu and Kashmir.

And do they eat honey like the black bears? “Well, natural honey is not found at such heights. This particular brown bear is omnivorous living on a diet that includes herbs, tubers, termites and other insects, small mammals and occasionally domestic livestock.”

How easy is it to sight this bear if you travel in India’s trans-Himalayan region? “The Himalayan brown bear is a shy mammal which avoids humans and usually retreats upon encountering them. I have been lucky enough to sight this beautiful creature three times since 2008, during my study on the snow leopard and its co-predators, stretching across the hills of Uttarakhand, Himachal Pradesh as well as Jammu and Kashmir."

And when was the last time he saw one? “I was lucky to sight one, along with my field assistants, during my field visit to Kargil District in May 2011. We had a sighting of a mother bear with a cub at a distance of 60 to 80m for almost 40 minutes and were able to photograph them. I had seen a mother and cub in the same area in November 2010 at a distance of 700m. There is a possibility that this could be the same family that I had observed before they went into hibernation, although I am not very sure.

And how does WWF-India want to help these beautiful creatures in the long run? “WWF-India is planning to work closely with the communities to reduce the conflicts of humans with carnivores and making them aware about the threats to wildlife. WWF-India also sensitizes communities about the benefits of conservation. Our Snow Leopard project is a step in this direction. I would like to acknowledge the support we have received from the Department of Wildlife Protection, Govt. of J&K as well as local communities in this endeavour,” concludes Aishwarya.

The mother with the cub
© Aishwarya Maheshwari/WWF-India Enlarge 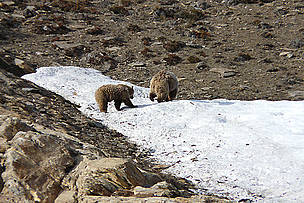