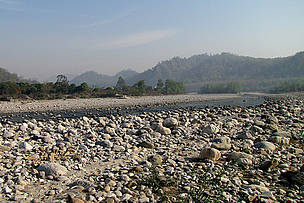 A hidden paradise
The Terai Arc Landscape encompasses the Terai flood plains as well as the Bhabar tracts, sprawling over a 49,500 sq. km area in India and Nepal, about 60% of which lies in the states of Uttarakhand, Uttar Pradesh and Bihar in India. At the heart of the Terai Arc Landscape (TAL) are Corbett Tiger Reserve and the surrounding forests, where a substantial part of WWF-India’s conservation efforts in the TAL are focused. The forests in the landscape are facing issues that are threatening their existence like never before, among the reasons being fragmentation and loss of corridors, unsustainable land-use policy, human-wildlife conflict and depletion of forest resources. Also, poaching of wildlife – both prey and their predators, is still a threat to the landscape’s wildlife.

Keeping the corridors for good
Since the late 1990s, WWF-India has been working in TAL-India through its various field offices, with activities around the Corbett Tiger Reserve focusing on species conservation as well as garnering local communities’ support for it, administered through its field office, earlier located at Ramnagar, and now at Kaladhungi, within the state of Uttarakhand.

The community work in and around the village of Mankanthpur in the Kosi–Baur wildlife corridor was initiated in 2006, the prime reason for it being its presence in the list of the top 20 villages affected by the human-tiger conflict. This human settlement is located in the middle of the elephant and tiger movement area.

WWF-India’s interventions
When the work was initiated, WWF-India set about gaining the trust of the villagers and building bridges with the local communities. When it was observed that it was the village women who were primarily in conflict with the tigers, due to their frequent visits to the forest to collect fuel wood and cattle fodder as well as Non Timber Forest Produce (NTFP), two women’s Self Help Groups (SHGs) were formed. The women, thus, were encouraged to take initiative in conserving the forests and the wildlife. Initially, WWF-India’s field teams came across frequent forest fires due to the presence of large amount of leaf litter on the forest floor. At the same time, although the villagers were being introduced to vermi-composting by the Government agencies they didn’t have enough biomass to set up the leaf litter composting units.

In the areas where there were high instances of forest fires, WWF-India’s field office requested the forest department to allow the SHGs to remove the leaf litter which could be used by them as a raw material for their vermi-compost units. Once this was implemented the forests benefited, as there was less biomass on forest floor during summer months which is the chief fuel for the forest fires in those months.

Asked if removing leaf litter from the forest floor reduces the fertility of the forest soil, Dr. KD Kandpal, Landscape Coordinator, WWF-India’s TAL landscape says “The leaf litter has a higher chance of catching the spreading fire. It is collected from the forest floor in the forest fringes only during the peak fire season in summer (May-June). Even if the villagers do not remove it, the same will be burnt by forest department as part of their annual ‘controlled burning’ exercise before the start of the forest fire season. Soil fertility is reduced only if the amount and the quantum exceed the litter fall rate. The forest floor already has enough litter undergoing decomposition which keeps supplying nutrients back to the soil. The litter that villagers pick is the fresh litter fall received during peak fire season and if not removed will have more hazards than the benefits of nutrient replenishment. The soil nutrient dynamics of the forest floor provides a nutrient back log of more than a decade even when no further leaf litter is added. Also, when the organic matter is excessive it increases the carbon nitrogen ratio reducing the nutrients available for plants.”

“WWF-India’s team worked with the Forest Department and the communities in devising a mechanism where the villagers would extract the resources from the forest in a sustainable way, where lopping and cutting of wood would be prohibited and only fallen branches could be removed. The communities were also informed that they would not be allowed to use the West Chandani and Barua beats of Bailparo range, the main corridors used by tigers, to which they readily agreed. It was also agreed in the village meetings that only the forest fringes would be used to extract the fallen wood and that each village would extract the fodder and firewood only for 2 to 3 days a week“, adds Dr. Kandpal.

To further reduce the demand for fuel wood, WWF-India’s team helped the villagers with LPG stoves, but this had to be dropped soon as the cost of refilling LPG was beyond the financial capacity of the villagers. WWF-India soon changed its tack and replaced the LPG supply with that of biogas units and this is proving to be a good change even today. The first of the positive impacts is the cattle are now tied in the pen of the villages as their dung is needed to run the bio gas stoves. This has decreased the biotic pressure on the forests as there are hardly any cattle grazing inside them, which in turn has reduced the number of the cattle killed by predators in these forests. According to the statistics, in 2006 there were 15 cattle killed by the wild carnivores; the same dropped to below the double digit in 2007 and in 2010 there were only three cattle kills reported on the periphery of the village.

Apart from the biogas units, the villagers are also reaping the benefits of having vermi-compost units. A unit that was setup in 2007, in partnership with Durga SHG with an investment of Rs.25,000, is today linked with 120 households of this village with this SHG helping them market the product. Inspired by the success of this particular unit, authorities of the Ramnagar block of Government of Uttarakhand identified this as an ‘Organic school’, a training centre where villagers from the other parts of this block would be trained in the process. This also provided for WWF-India’s Ramnagar team to be a part of the training processes in helping them understand the issues affecting wildlife and seek their cooperation to conserve the natural resources.

Communities for tiger
On their part, residents of the Mankanthpur village have now become part of community forest patrolling team along with the forest department officials. This has helped increase the efforts to combat poaching and encroachment and other unwanted interferences in the forests. Earlier the same villagers also informed that there were people from other villages who were extracting resources (fuel wood and fodder grasses) from the wildlife movement areas over the limits allowed in their permits. WWF-India’s team approached the authorities along with Mankanthpur villagers to stop this, fearing repercussions on the wildlife habitat and the resultant increased risk of human–wildlife conflict. Soon an order was issued by the Forest Department to the Range Officer of Bailparao Range to stop giving permits to collect fuel wood from West Chandni and Barua beat.

Another benefit is the absence of retaliatory killing of carnivores by the villagers of Mankanthpur despite the recent occupancy survey carried out by the forest department showing the presence of the tiger in all the ten beats of Bailparao Range of the Terai West Forest Division.

KD Kandpal adds, “The future looks bright for the tigers of this area. The recent tiger estimation exercise in the adjacent Ramanagar forest division has revealed a density of 12 tigers per 100 sq. km. and the forests of Bailparao are ready to accommodate tigers dispersing from there. WWF-India has taken a step forward and started similar work this year in the nearby Pawalgarh village, famous for the ‘Bachelor of Pawalgarh,’ a huge male tiger described by the famous hunter conservationist Jim Corbett, in his book ‘Man-eaters of Kumaon’, in 1930. Our aim is to ensure the corridors are kept for good for generations to come,” he adds. 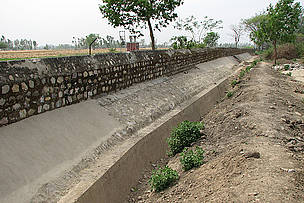 A trench and a stone and concrete wall built with support of WWF-India along the southern boundary of Corbett Tiger Reserve.
© Ameen Ahmed/ WWF-India Enlarge 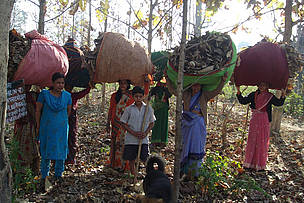 Villagers removing leaf litter from the forest fringes, that helped in reducing the instances of forest fire
© WWF-India Enlarge 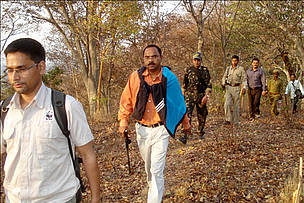