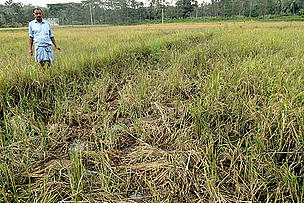 After a series of successful efforts at radio collaring elephants in the Western Ghats, an attempt to immobilise a male elephant in the Thadagam area of Coimbatore Forest Division on 10 July 2011, had undesired results. A young male, approximately 18 to 20 years old reported to have been involved in several killings of humans, was chosen for radio collaring. It was part of a herd that was known to intrude into human habitations from the forests. Unlike previous radio collaring operations, this one was conducted at night as this elephant was spending the days in the forest where the terrain was unsuitable to immobilise it. The dense thorny vegetation and the temperament of the animals made it very dangerous for the teams to follow and dart animals as well as locate them in this area during the day. It was easier to see them at night when they moved into human use areas. The site of darting was a brick-kiln regularly frequented by problem males, about 2 km from the Reserve Forest boundary.

When the animal was darted at 12:20 AM, it turned around and stood under a tree. However, a drunk worker near the kiln screamed and the elephant ran along a less used elephant path resulting in a delay in locating it. 55 minutes later, at 1:15 AM, when the animal was located on a small slope along a path in a nullah (water course), it was already in a state of collapse and was not showing any signs of respiration. It was found sleeping on its side, in a front reclined position - its head down and hips higher than the head. This position is not conducive for elephant's respiration as the abdominal contents exert pressure on the chest cavity and severely inhibit respiration. Attempts to revive it using a reversal drug failed and a post-mortem later established the cause of its death as respiratory arrest (hypoxia due to suffocation).

Background
The human habitats bordering the forests around Coimbatore city in south-western India are seeing severe human-elephant conflict as the expanding human population propelled by industrial and agricultural growth is increasingly fragmenting elephant habitat in this landscape. The conflict’s severity can be gauged by the fact that in 2010 alone seventeen humans were reported killed by elephants in the Coimbatore Forest Division and five killed so far this year. Although the Government pays monetary relief to the victims’ next of kin, it is not easy for the communities to reconcile themselves to the human deaths. Already angry at the depredation of their crops by the elephants in addition to smaller animals like wild boars and ungulates, an ever increasing number of people are getting restless about elephants getting ever closer to them.

Keeping humans and elephants apart
Efforts to mitigate the human elephant conflict include setting up of electric fences, elephant prevention trenches (EPT) and anti-depredation squads (ADS). However, the large interface between human used lands and elephant habitat has resulted in limited success of these measures. In several parts of the landscape the agricultural areas adjoining forest are fallow, often with scrub land, and it is difficult to deploy and maintain barriers in such areas and elephants are more likely to breach them there.
WWF-India has been supporting the Forest Department to radio collar ‘problem’ elephants. Radio collaring provides the means to assess elephant habitat requirements in this fragmented landscape and help identify the major habitat and movement related constraints that possibly cause these elephants to intrude regularly into human use areas. Another objective is to identify those areas of the home range (of the collared elephants) where they come into the highest levels of conflict. These areas could then be targeted for priority action aimed at mitigating conflict. Such knowledge will help ascertain the most feasible and long-term mitigation actions.

Another objective of radio collaring is to test the use of radio collars to prevent elephants from raiding crops, something that has not been carried out or monitored in a systematic way. Anti-depredation squads today work either in a reactive manner (go to drive elephants after they have entered a village/crop field) or through random intervention (where they move along the forest boundary and deal with any conflict animals they may encounter randomly). Use of telemetry (satellite and VHF) allows pro-active intervention (driving the elephants off before they raid) and also eliminates randomness in detection (as animals are always detected when the team is intervening). The ability to precisely locate the collared elephants significantly reduces the risk to the team involved in all encounters. Based on the findings of this study, the feasibility of using such an approach to address human-elephant conflict issues at the larger landscape level can be tested. This will result in reduced crop loss/property damage to the farmers/local villagers and the saving of human lives.

WWF-India’s support to radio collaring operations
In June 2011, an elephant was successfully radio collared by the Kerala Forest Department with support from WWF-India in the Muthanga Wildlife Range of the Wayanad Wildlife Sanctuary. It is being monitored by the Forest Department with support from WWF-India field teams. In another operation on 7 July 2011, staff from the Tamil Nadu Forest Department chemically immobilised and radio collared an eighteen-year old female elephant from a herd known to raid farmlands, at Bolampatti Range of Coimbatore Forest Division. This animal is being monitored by the local field staff along with the senior officers of the Tamil Nadu Forest Department and WWF India’s field teams. From the current observations, this elephant have been intruding into human use areas (much of it fallow) up to a distance of 2 km from the RF boundary.

WWF-India’s expert on elephants Ajay Desai has this to say on the elephant’s death in Thadagam, “It is very unfortunate and sad that this elephant died…. Our primary interest remains in saving even these problem elephants apart from the people affected by such elephants. Such setbacks, although very rare, are likely to occur during any immobilization operation as all aspects of the operation cannot be totally controlled despite all precautions being taken.

The project cannot be abandoned as the welfare of the local people, who are the targets of crop depredations by elephants and face life and death situations on a daily basis, remains a critical issue. We also cannot abandon our effort to seek better management and mitigation of constraints faced by elephants within their habitats which force them to come into conflict with people. Conflict related deaths of elephants remain the greatest threat to populations today. The management has to upgrade and use the latest tools to gather relevant data to plan and implement management in a scientific manner. The long term benefit of the people as well as elephants is the primary objective of the project.” 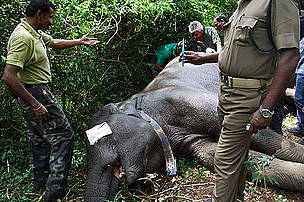 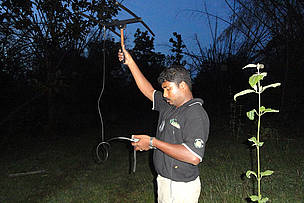