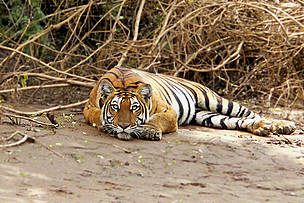 The estimated population of 1,706 individual tigers represents a 20 percent increase from the last
survey in 2006, which estimated a number of 1,411. The increase is based on the survey of additional areas as well as an increase in the number of tigers within high-density populations.

These results are the highlights of the Indian Government’s report - Status of Tigers, co predators and prey in India, 2010, which was released by Shri. Jagdish Kishwan, Additonal Director General (Wildlife), Ministry of Environment and Forests, Government of India at an event organized by the National Tiger Conservation Authority (NTCA) at WWF-India in New Delhi earlier today.

This countrywide assessment of tigers, co-predators and prey included all 17 tiger states, and involved 477,000 work-days by forest staff and 37,000 work-days by professional biologists, making it the largest exercise of its kind in the world.

“After the 2006 pan India tiger population estimation, the present exercise is even more comprehensive in terms of the area covered and methodologies used,” said Mr. Ravi Singh, Secretary General and CEO of WWF India. “The involvement of conservation partners, including WWF, has led to broad based efforts and built a stronger constituency and capacity for tiger conservation in India.”

Despite the good news, the detailed report warns that tigers are still in danger due to an overall 12.6 percent decrease in area occupied by tigers, meaning more tigers are being squeezed into smaller areas, which could lead to a lack of dispersal and consequent loss of genetic exchange between populations, and an increase in human-tiger conflict.

Dr. Y V Jhala, lead author of the report said, “The loss of corridors does not bode well for the tiger. Poaching can wipe out individual tiger populations, but these can be re-established by reintroductions as has been done in the Sariska and Panna Reserves. However, once habitats are lost, it is almost impossible to claim them back for restoration.”

WWF-India partnered with the NTCA and the Wildlife Institute of India, which led the massive estimation exercise. WWF played a role in the exercise across the landscapes where it works in the states of Arunachal Pradesh, Assam, Kerala, Madhya Pradesh, Tamil Nadu, Uttarakhand and Uttar Pradesh, covering both tiger reserves as well as habitats outside tiger reserves and connecting corridors.

The report further states that tigers require good forests and prey, along with undisturbed breeding areas, for long-term term survival. It is hoped that the recommendations in the report will lead to planning decisions that balance India’s long-term development needs with conservation concerns to secure a future for the country’s most iconic species.