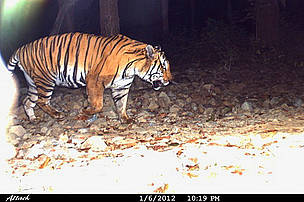 Uttarakhand’s picturesque Nandhor Valley is located at the heart of the Terai Arc Landscape - an 800km long stretch of fertile land that lies along the Himalayan foothills bordering Nepal in India. The TAL region, fed by the rivers flowing down the Himalayas, teems with forests on one hand but is threatened by an ever increasing human population on the other.

The Nandhor valley, with an area of about 1800sq. km and bound by Gola-Ladhya and Sharda rivers, is spread out in Haldwani, Terai East and Champawat Forest Divisions. Among the wildlife corridors here are Gola, Kilpura-Khatima-Surai and Boom-Bhramdev. The vegetation of the Nandhor valley forests comprises a mosaic of dry and moist deciduous forests with traces of temperate forests towards the higher elevation areas. This landscape still holds potential for the conservation of tigers, as it has nearly 1000 sq. km of tiger habitat that needs better protection. This area is well connected with the forests in Nepal across the River Sharada on the eastern side and it continues till the eastern part of Sukhlaphanta Wildlife Reserve.

According to Joseph Vattakaven, Tiger-Coordinator, WWF-India, “Tigers once had a wide distribution across the Nandhor valley; however, they have been exterminated through much of their previous range due to various causes driven by adverse human impacts. But with protection and connectivity in place, tigers will rebound and provide us with a wonderful opportunity to increase their numbers”

To find out how the tiger is faring in the area and to see if there is a potential for tigers to reoccupy these forests, WWF-India initiated a study. The chief aim of this ongoing study is to determine prey - predator presence in the region in Nandhor valley, which is one of the potential tiger areas in the TAL India.

Occupancy surveys in 2011 and significant findings

Occupancy surveys and camera trapping completed in parts of Chakata and Nandhor ranges of Haldwani forest division have revealed tigers in both the ranges with multiple captures of four tiger individuals being recorded. Worth mentioning here is a large male previously photographed by WWF-India in September 2011 which was recaptured by the camera traps in Nandhor Range. Another good news is the camera trapping of a tigress with her two sub-adult cubs, which shows the great potential of the area as a breeding ground for tigers. Among the other significant species caught on the cameras are the Himalayan black bear (Ursus thibetanus) and Serow (Naemorhedus sumatraensis), which are usually found at higher altitudes.

According to Rekha Warrier, biologist working with WWF-India’s field team in this exercise, “Surveys in Amlakheda were slow owing to rain and a paucity of survey trails but we found tiger signs all along the Nandhor. It seems 2 to 3 new individual tigers might be operating in the area. Following the conclusion of our trapping efforts along the road, we hope to extend camera trapping into the Nandhor valley in February, when Session 5 of camera trapping will be initiated and concluded.”

The study found out that the roads and drainages close to the Gola River showed signs of extensive disturbance by humans. According to Joseph,”This landscape can house a breeding population of 40-50 tigers, but poaching by local communities of prey species and occasionally tigers is potentially a major cause of absence of tigers in this area.”

According to Dr. K.D. Kandpal, Coordinator, WWF-India, TAL-Kaladhungi Field Office, “Nandhor valley is governed by the three forest divisions of Haldwani, Terai East and Champawat (Boom Range). This is a potential site where we could see tiger numbers doubling in coming years. Two priority corridors namely Kilpura-Khatima and Boom-Bhramdev of TAL fall in Nandhor. WWF-India is committed to the long term conservation of these forests. In this direction, a patrol elephant was also provided to the forest department to help keep a better eye on these forests. If stringent protected is continued, Nandhor can serve as a source population for tigers across boundaries in the Himalayas (Indo-Nepal).” 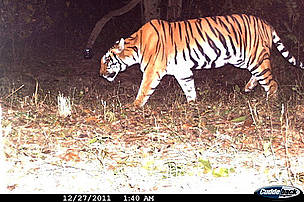 Another individual walks past a camera trap in Nandhor.
© WWF-India Enlarge 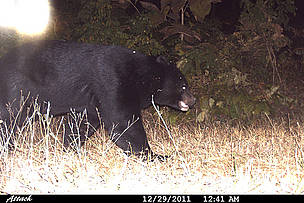 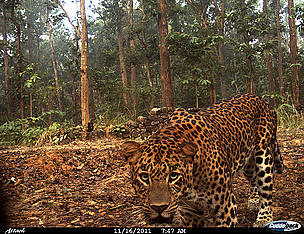 A common leopard decides to take a closer look at the camera trap.
© WWF-India Enlarge