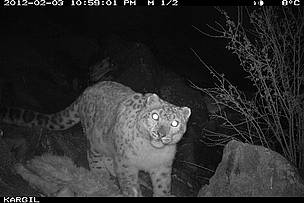 Just a decade after the spectacularly picturesque mountains of Kargil District in India’s Jammu and Kashmir saw rifle drawn soldiers in battle camouflages against the backdrop of flying machines and big guns, the relative peace since then has helped the same valleys and passes in the Himalayas shelter camouflages of some of the most elusive cats on earth. Two adult snow leopards (Panthera uncia) have been identified from pictures captured using infrared camera traps in the district by WWF-India’s field team led by researcher Mr. Aishwarya Maheshwari, a few kilometres from the line of control separating India from its neighbour Pakistan. This is the first time that camera trap pictures of snow leopard have been obtained from the Kargil District since they were installed here by the WWF-India team in mid-2010. This also happens to be the second photographic evidence of snow leopards in Kargil. Aishwarya earlier captured photograph of a snow leopard preying a herd of Asiatic Ibex (Capra ibex sibrica) on mountain slopes north of Kargil town on 13 June 2009.

Among the most Endangered* of big cats, the snow leopard is distributed from Afghanistan in the west to India’s Arunachal Pradesh in the east and extending into Mongolia in the north, straddling the high plateaus and mountains of Himalaya and beyond (trans-Himalaya). Despite its wide range of habitat, its population trends are only recently coming to light as more researchers dare tread their extreme cold habitats in their search.

Aishwarya, who is documenting high altitude wildlife in Himalayas on the Indian side since 2007, is currently working on the project 'Study and Distribution of Snow Leopard, its co-predators and their prey in Kargil and Drass, Jammu and Kashmir, India,' with support from the Department of Wildlife, J&K says, “We have captured snow leopard images in our camera traps and identified two individual snow leopards in Kargil. Overall we got more than 500 photographs from two separate captures. We are maximizing our efforts for recaptures. Thanks to Kazim, our Field Assistant in Kargil who continuously worked in very challenging conditions and has been engaged in our snow leopard work since 2010, I am excited to share this news with the world.”

The camera traps set-up in mid-2011 have since then captured images of all the co-predators of snow leopard except brown bears and include red fox (Vulpes vulpes) and Tibetian wolf (Canis lupus chanco). However, the snow leopard was captured only now.

Aishwarya says “WWF-India is working with the communities to reduce the conflict of humans with carnivores and making them aware about the threats to wildlife. We are also sensitizing communities about the benefits of conservation. Our Snow Leopard project is a step in this direction. The support we have received from the Department of Wildlife Protection, Govt. of J&K as well as local communities in this endeavour is deeply appreciated.”

Your support counts:
WWF-India is looking for support to conserve endangered creatures like the snow leopard. You can help us by using the below link to donate for our Snow Leopard Project
DONATE NOW! 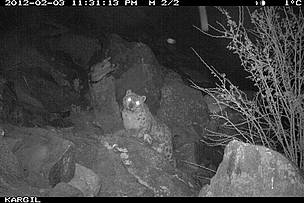 A total of 500 images were captured from which two separate individuals have been identified.
© WWF-India/ Dept of Wildlife J&K Enlarge 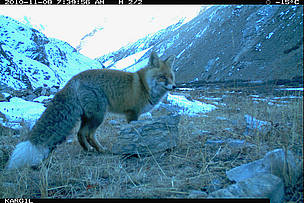 A red fox caught in a temperature of minus fifteen degree centigrade.
© WWF-India/ Dept of Wildlife J&K Enlarge 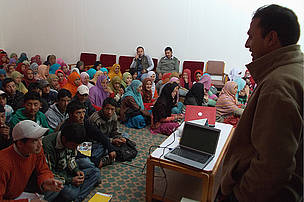 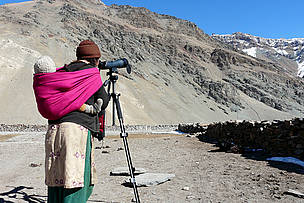