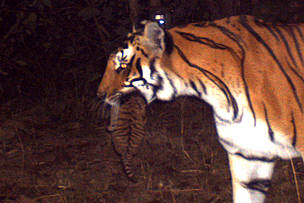 Background
A few weeks after the first eyewitness photo documentation of a wild tiger crossing the Kosi River corridor in northern India’s Terai Arc Landscape, WWF-India’s field team working in the area led by Meraj Anwar, Senior Project Officer, has collected camera trap photo evidence of the corridor being used by at least 13 tigers, highlighting its importance for the area’s big cats.

As part of the All India Tiger Estimation, in 2010 a WWF-India study in the Ramnagar Forest Division (FD) in collaboration with NTCA-WII estimated a density of 15 tigers per 100 sq. km - the highest outside a tiger reserve anywhere till date in India; and probably the world.^ Building on these findings WWF-India initiated a study using camera traps later that year in Kosi ranges of Ramnagar FD and part of Sarpduli range of CTR (see map) to identify tigers residing along the periphery of Corbett Tiger Reserve adjoining Kosi River. The aim is to estimate tiger densities and assess the functionality of the corridor with reference to tiger and co-predators, as well as generate a baseline for the area.

According to Joseph Vattakaven, WWF-India’s Tiger coordinator, “This study is the first of its kind in this landscape and generates baseline data for the Ramnagar Forest Division and the functionality of the Kosi River which will help in their long term conservation. Knowing the tiger numbers and their movement routes in a corridor would provide a sound database in taking decisions on developmental activities within and around the corridor.”

Helping save the tigers’ haven
The Terai Arc Landscape (TAL) is spread from near River Yamuna in the west to River Bhagmati in Bihar in the east stretching along India’s border with Nepal. Its most important source population for wild tigers is the Corbett block, which has a density of 17.8 tigers per 100 sq. km, highest in the country. Even Ramnagar Forest Division’s estimated density of over 15 tigers per 100 sq. km. is much higher than some of India’s important tiger reserves.* The Corbett Block population is the source for the entire landscape; from Kalesar WLS in Haryana to Kishanpur WLS in Uttar Pradesh^. Presently, the tiger populations in the landscape are patchy and are probably linked to each other through wildlife corridors in the landscape.

The Kosi River corridor is arguably the most important of all corridors in the landscape, as it connects CTR to the Ramnagar FD and onwards to the forests of Haldwani Division in the east as well as Terai Central Division in the south-east through Nihal-Bhakra corridor@.

In this latest study, a tigress with her two sub-adult cubs was camera trapped in Terai West Divison feeding on a domestic cow. In January 2012, the same tigress was photographed carrying an approximate one month old cub in her mouth, further south in the Kosi corridor. Incidentally, the villager whose cow the tigress and her cubs killed was compensated under the WWF-India funded Interim Relief Scheme (IRS) and therefore retaliatory attack against these tigers by that cow owner was prevented. The fact that the tigress survived and it was photographed later is an example of the cattle compensation scheme working when implemented in earnest.

The area is not without threats as the level of human-animal conflict in TAL is increasing, primarily involving tiger, leopard and elephant^. The area surrounding Corbett Tiger Reserve has one of the highest rates of cattle kills in the world. An average of 1000 cattle kills per year was documented by WWF-India's team in the 5 year period between Jan. 2006 and Dec. 2010. $

According to KD Kandpal, Landscape Coordinator, Terai Arc Landscape, “Ramnagar FD in particular has witnessed increased human-animal conflict involving tigers over the previous years. Human-animal interaction is frequent owing to movement of humans in forests as well as the expansion of tourism in the area, particularly the many tourist resorts that have sprung up here in the recent past. If unchecked, the resorts mushrooming in the area will choke the corridor and block the free movement of tigers through it. If the tiger in India is to be saved for posterity, the Kosi River tiger corridor needs to be protected at all costs”
Meraj adds “Translocation of the two human settlements of Chukam and Sunderkhal from this part of corridor will not only ease the seasonal migration of elephants but also help the dispersal of tigers and resource based temporal movement of other wildlife, between CTR and Ramnagar FD. It will also decrease human- wildlife conflict in the area to the lowest possible level.”

WWF-India acknowledges the support of the Uttarakhand Forest Department in carrying out this camera trapping exercise and similar activities in the state. The work of the state forest department authorities in protecting tigers and other wildlife is worth appreciating.

References:
* Study by WWF-India in collaboration with National Tiger Conservation Authority and Wildlife Institute of India 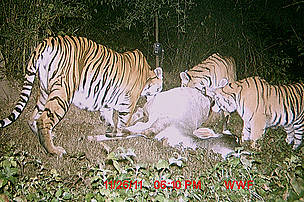