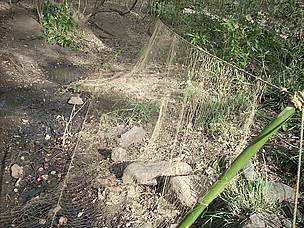 The Kanha-Pench corridor in Central India offers crucial connectivity between the two important tiger source populations in Kanha and Pench through extensive tracts of forests. Such forest corridors offer much needed contiguity between different tiger populations, thereby preventing their isolation as well as subsequent loss of genetic vigour, and help in long term tiger conservation.

These corridor forests have water holes that are used by wild animals dispersing through the corridor during the summer months. These spots are vulnerable to poaching as poachers can easily target wild animals, including tigers, coming to drink water through use of traps and poisons. For the past two years, WWF-India’s Satpura Maikal Landscape (SML) Programme staff members have been engaged in extensive monitoring of such waterholes in the Kanha-Pench corridor during summer to prevent waterhole poisoning. The monitoring is done in collaboration with the Madhya Pradesh state Forest Department.

One such crucial water hole is located in the Atarwani beat of the South Seoni Forest Division in the corridor near the Pench Tiger Reserve. During tiger monitoring exercises it was found that tigers and other animals such as gaur, barking deer and several species of birds frequently visited this waterhole during summer.

On the evening of 29th March, Girish Patel, WWF-India Field Officer, while on his scheduled waterhole monitoring came across a group of villagers at the water hole. As he recounts, “I saw a group of villagers from different villages namely Atarwani, Sakhadehi, Dhobisara and Darasi. Curious, I asked why they were sitting there. They replied that they were just passing by. So I started moving towards the waterhole and to my surprise they followed me and I suddenly saw nets set up with bamboo near the waterhole. In a flash, I understood from my experience working in this area what they were up to. But instead of reacting in shock, I behaved normally and asked them about the nets. They admitted that they setup the traps for small mammals and birds. I casually took photographs and shot some video for documentary evidence. I soon left and immediately informed the Range Officer of that place as well as the Divisional Forest Officer and my seniors”.

Unfortunately, by the time Forest Department personnel reached the spot the suspected poachers had decamped but the traps setup around the water hole were confiscated. Due to the documentary evidence collected by Mr. Patel an arrest warrant was later issued against the suspects and the case is currently under investigation.

Prompt and decisive actions such these will create a deterrent among potential poachers and hence reduce the frequency of such incidents. Increased vigilance in this area will lead to better protection of tigers and other wildlife which in turn will improve the functionality of the critical Kanha Pench Corridor. 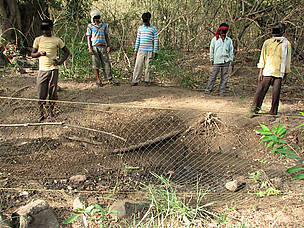