The camera trap photo of a red panda from Arunachal Pradesh, India
© WWF-India
Camera trap photos of the red panda have been obtained by WWF-India staff from cameras stationed in the remote heights of the state of Arunachal Pradesh in the north east of India. These photos may be the first camera trap photos of the red panda from the state. These results are also a continuation of the rich findings obtained during a survey of red panda habitats in the Pangchen Valley of Tawang district in the state in December 2012. WWF-India’s Western Arunachal Programme personnel conducted the survey along with community members from the valley during December 2012 and January 2013, which consisted of presence–absence surveys and monitoring of camera traps deployed during the previous survey.

“We have trained local villagers to setup camera traps and also help us with the red panda surveys so that they develop an interest in conserving such important animals for future generations,” said Mr. Lham Tshering, Field Officer, WWF-India WAL Office who was involved in undertaking the surveys.

In one such camera trap deployed on a ridge top near Kumrotser, where two consecutive red panda sightings were obtained in December, a solitary red panda was captured in the wee hours of the morning of 22 December 2012, which is perhaps the first camera trap capture of the animal in Arunachal Pradesh. The same camera also captured a barking deer, yak, and a variety of birds including blood pheasants. Alarmingly, the camera also photographed a dog using the same trail, a possible threat for the red pandas in the area. Pugmarks of a leopard were also found earlier in the vicinity making the location a vital animal mini-corridor.

Another camera, located deep within the more inaccessible parts of the valley near a stream, captured frequent shots of Himalayan gorals (Naemorhedus goral) coming down for water, serow (Caprnicornis thar) and Arunachal macaque (Macaca munzala) among others. Both the camera traps were deployed for an average of 12 days and the results have shown the advantages of such short cycles for detection of rare fauna in the area. More nearby areas will be sampled with camera traps for an extended period for documentation of fauna and possible threats.

“I wish to congratulate WWF-India team on this important find and hope that they continue this work and also expand the camera trap sampling to areas such as Mago Chu Valley in future where there have been reports of snow leopard presence”, said Mr. Pekyom Ringu, DCF, Wildlife and Biodiversity, Arunachal Pradesh Forest Department.

The presence-absence surveys conducted simultaneously also yielded positive results when another red panda was photographed by Lham Tshering on 9 January 2013 in an area called Sana. Abundant signs of red panda presence were also recorded throughout, re-emphasizing the importance of the Pangchen Valley for long term conservation of red pandas in the region. The present information, complied with the previous data, is expected to give a clearer picture of the status and distribution of the firecats in the valley.

One of the most charismatic mammals found in the wild, the red pandas (Ailurus fulgens) are indicator species of bamboo forests. Their dwindling population faces the threats of habitat loss and fragmentation due to increasing human pressures, feral dog predation and hunting for its pelt, which is used to make traditional hats and clothing in China.

Pangchen Valley is one of the main focal areas in WWF-India’s red panda conservation project, undertaken with support from the Arunachal Pradesh Forest Department, in Western Arunachal. Since 2008, field surveys have been carried out to document the presence-absence of red panda and to ascertain the population status of this not so commonly seen mammal. WWF-India, through its Western Arunachal Landscape (WAL) office, has been engaged with the local communities for conservation and sustenance of biodiversity in the area since 2007. The striking biodiversity of the valley includes the red panda, common leopard and the critically endangered black necked crane, a winter visitor to the valley, and many rare trees, shrubs and medicinal herbs. 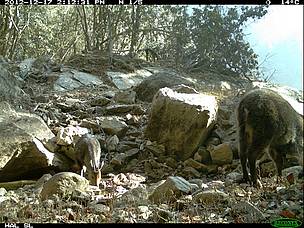 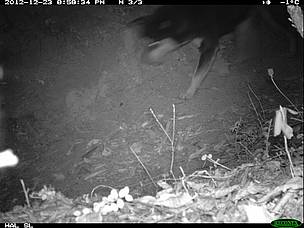 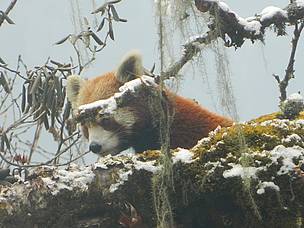