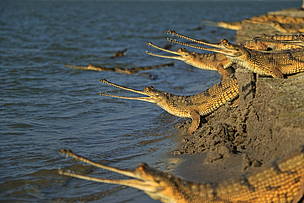 © Areeb Hashmi / WWF India
Hastinapur, Meerut:  35 captive reared Gharials were released into the Ganga at Hastinapur today by Uttar Pradesh Forest Department officials, WWF-India and Ganga Mitras into a stretch of the Ganga identified as habitat for the species conducive to their survival. Since the first release into the area in 2009, 606 Gharials have been made their way back to the river.

Ganga Mitras from Makhdoompur and districts of Bijnore, Moradabad, Bareilly and Shahjahanpur participated in the release along with officials of the Uttar Pradesh Forest Department and WWF-India. The Mitras are part of a multi stakeholder platform that brings together people to participate in conservation initiatives.

Chief Conservator of Forests Mr. Mukesh Kumar, IFS said “The Uttar Pradesh Forest Department in collaboration with WWF-India and local communities is making an effort to restore the ecological health of the Ganga in Hastinapur and it is our dream to develop it into a model for aquatic biodiversity conservation”

The 2.8 year old juvenile Gharials (12 male and 23 females) were reared at the breeding facility in Kukrail, Lucknow and transported to Hastinapur Wildlife Sanctuary in special wooden containers. Biometrics of each of the animals were recorded at the facility prior to the release and their scutes were cut for identification. The Gharials that belong to the 2013 batch of hatchlings weighed between 4.5 to 6.5 kgs and measured between 129cm and 145 cms in Total Body Length (TBL).

Professor B. C. Choudhury, South Asia Regional Head- IUCN Crocodile Specialist Group spoke to the group about the Gharial, its distribution pattern and anthropogenic threats that they face. He also shared insights on the process of the release right from the breeding stage onwards while stressing on the regular monitoring of the species. Professor Choudhury said “So far the reintroduction focus has been on the tributaries of the Ganga and the main stem has not been the focus. It is therefore important that a protected area along the Ganga- like Hastinapur, is selected for the release thereby not only providing attention to the aquatic biodiversity but also giving a fresh lease of life to the critically endangered Gharial”

District Forest Official, Mr. Manish Mittal was also present and oversaw the process of the reintroduction. The release came to a close with the Ganga Mitras taking a pledge on the banks to actively engage in conservation of the Ganga.

Mr. Suresh Babu, Director- Rivers, Wetlands & Water Policy said, “Today’s release is an example of collaborative habitat and species conservation efforts between local communities, Government and Civil Society which will go a long way in rejuvenating the Ganga. We need more such models to realise the dream of a healthy Ganga.”

9 animals released in 2014 were tagged last year to monitor their habitat dispersal patterns and regular monitoring is currently being conducted through radio tracking. WWF-India and UPFD will initiate 20 day tracking of the newly released animals to closely watch their acclimatization in the wild.

The Gharial, a critically endangered crocodilian is one of the 7 indicator species that WWF-India works to conserve along with the Dolphin, Otter, Mahaseer and three species of Turtle as part of  ‘Rivers for Life, Life for Rivers’ supported by the HSBC Water Programme. 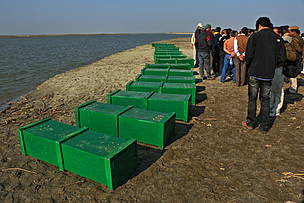 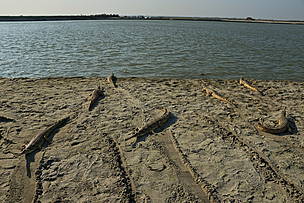 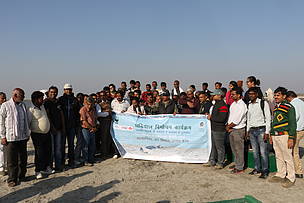