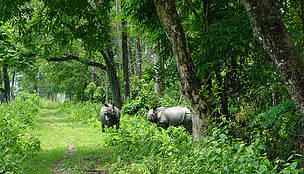 With an objective to increase the population of three Asian rhino species (Greater one-horned rhinoceros, Javan rhino, and Sumatran rhino), the New Delhi Declaration on Asian Rhinos 2019 was signed by representatives of the governments of India, Bhutan, Indonesia, Malaysia, and Nepal. As part of the declaration, the rhino range countries also agreed to review the population of the three Asian rhino species every four years to reassess the need for joint actions to secure their future. The twelve point strategic actions thus outlined the following actions-
Key elements of protecting rhino habitats and corridors with discussions around protection work were discussed. Speakers from India presented how the political will, and strengthened enforcement of wildlife protection law particularly in the state of Assam enabled successful rhino conservation. To further strengthen the conservation efforts in India, a national conservation strategy on rhino conservation was also released in the meeting. Speaking at the launch of the strategy on February 26th, Dr. Harsh Vardhan, Hon’ble Minister for Environment, Forests and Climate Change, Govt. of India re-affirmed India’s commitment towards rhino conservation in India. He further added, “The national strategy will further pave the path for long term conservation of the Greater one- horned rhinos in India. I also wish the range country of critically endangered Javan and Sumatra rhinos success in their endeavour to secure the future of the two critically endangered rhinos in Asia.”

Speaking about the landmark declaration, Shri Soumitra Dasgupta, IFS, Additional Director General of Forests (Wildlife), MoEFCC said, “The commitment of the five rhino range countries has been further reinforced with the signing of this declaration.”

Dr. Bibhab Talukdar, Chair of IUCN/SSC, Asian Rhino Specialist Group added, “I express my sincere gratitude to the Ministry of Environment, Forest and Climate Change for hosting the second edition of the Asian Rhino Range States meeting. It is also heartening to have all the range country representatives to agree and sign the New Delhi Declaration on Asian Rhinos 2019 to protect the three rhino species.”

Speaking about the release of the National Conservation Strategy for the Indian Rhino, Dr. Dipankar Ghose, Director, Species and Landscapes, WWF-India said, “The release of the national conservation strategy for the greater one-horned rhinos by the Ministry of Environment, Forest & Climate Change, Government of India is a significant step in highlighting the conservation of existing and potential rhino habitats. Focused on strengthening protection, expanding present distribution range by at least 5%, research on rhinos in India, active Indo- Nepal and Indo- Bhutan trans-boundary engagement, and emphasis on use of wildlife forensics for controlling poaching and illegal trade in rhino parts and products, the national strategy will further strengthen rhino conservation efforts in India.”