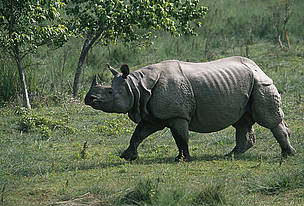 Indian rhinoceros Rhinoceros unicornis Royal Chitwan National Park, Terai Arc Landscape, Nepal
© © WWF / Jeff FOOTT
WWF-India is extremely concerned with the recent incidents of the Rhino poaching in Assam and Nepal. Since last week five Rhinos have been poached in Assam and one in Nepal. Three of the Rhinos poached in India are from the Rajiv Gandhi Orang National Park while two were poached from Kaziranga.

The situation of the Indian rhinos remains precarious as global market pressures continue to push the demand for rhino horns.

In Kaziranga National Park, as per official records, 16 rhinos were lost in 2007 to poachers and another four Rhinos were poached till February 2008. After a lull, the poachers hit again killing a calf along with its mother on April 28, 2008. This disturbing news came soon after the incidents of poaching in Rajiv Gandhi Orang National Park which seems to have become a soft target for poachers.

This spate of killing has not left Nepal alone either - where 5 rhinos have been poached since January 2008.

The recent incidents clearly suggest that poachers are taking advantage of the gaps in our enforcement efforts at the field level. It is also clear that the poachers are becoming bolder and shooting animals in the vicinity of park camps and villages, again suggesting that enforcement efforts are no longer sufficiently deterrent and that the profits from this illegal trade are high enough to risk such an approach.

Reports also confirm that poachers are coming from areas outside Assam. The intelligence network available with Protected Area managers for pre-empting poaching is either non existent or seems to have a hit a wall largely due to the interstate and international nature of this trade. At the same time, the poaching cartels have closed ranks and have become more organized as an International crime syndicate.

According to reports available, the first attempt to remove a horn in Orang (in the middle of the night on 20th April 08) failed because of quick response by Forest Guards. A rhino was lost though. As this attempt was “unsuccessful”, the second poaching event took place the very next day which also failed due to swift action by the forest guards. After a breather, the poachers struck again on April 28, 2008, and took away the horn. This shows the determination of the poachers and the organizational support that is enabling them to carry out such strikes in quick succession. This is certainly a great cause of worry.

WWF-India along with partner and donor agencies has a major commitment for conservation of large mammals (Elephants, Rhinos, Tigers) in the Eastern Himalayas Eco Region. WWF’s field programmes have had considerable success including the initiation of the Indian Rhino Vision 2020 programme with the first Rhino translocations (from Pobitora Wildlife Sanctuary to Manas National Park) conducted last month.

WWF is also gravely concerned about protection of the recently translocated Rhinos in Manas National Park. It is clear that the protection staff will need additional help in terms of temporary anti poaching camps that should shift in accordance to the ranging patterns of the translocated rhinos. The protection of these rhinos will also call for special arrangements during the monsoon when the operations in the Park become difficult.

The morale of the field staff of Assam Forest Department, which seems to be at an all-time low, has been further adversely affected by the arrest of a Forest Guard in Laokhowa Wildlife Sanctuary by local police when their patrolling party came across and had to open fire at miscreants in the Sanctuary.

To ensure the safety of the Rhinos in Assam, WWF, on behalf of the larger conservation community, urges the government of Assam to rise to the open defiance shown by organised criminal gangs and put in place the following measures at the earliest:

1. The conservation of Rhinos is a national issue and must be prioritized as so. All concerned agencies of the Central, state government and civil society must come together in this moment of grave threat for this majestic animal.

2. It is critical that steps should be taken to strengthen the intelligence network to pre-empt any poaching attempt. For this, the Govt. of Assam should directly seek support of agencies like IB, Military Intelligence etc. to seek specific inputs on these events. At the local level, agencies like the State Police, local Army units etc. should come together to collectively put out a show of strength and collective response to this critical situation.

3. The Forest Department’ infrastructure must be augmented and additional forest guards must be recruited on a priority basis. Till such time, the ground force should be augmented by additional deployment of Special Armed Police and Paramilitary in the affected areas. These forces should work under the unified command of the concerned Protected Areas Directors, as required.

4. All enforcement agencies must work in collaboration on the ground to collectively meet this crisis. Personnel of the Forest Department who are engaged in patrolling the wilds in these difficult times should be given adequate support and protection for any acts that may be committed during discharge of their official duties.

5. It is critical that the support of the local community must be taken to ensure their participation in conservation efforts.

The Central Government must immediately convene an interstate meeting between the state enforcement agencies of Nagaland, Manipur, Assam and West Bengal and NGOs working in the region to collectively devise a response to the issue of interstate trafficking of rhino horns. It should also pledge additional support to the state of Assam to counter this crisis.

WWF India pledges all possible support to the Govt. of Assam in support of rhino conservation in this hour of crisis and urges all like minded and concerned individuals and organisations to extend their support for this purpose.