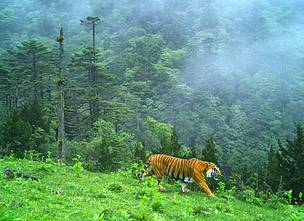 © GTF/NTCA/FEWMD/WWF-India
Sikkim is the land of the fabled snow lion. The state also supports populations of the Vulnerable snow leopard in its higher reaches. Through the recent surveys – under the aegis of Global Tiger Forum, National Tiger Conservation Authority and Wildlife Institute of India, implemented by the Forest, Environment and Wildlife Management Department and WWF India it has been further established that Sikkim is also the land of the tiger!
In recent weeks, tigers have been photo-captured in camera traps in 2 different locations in the remote montane forests of North district of Sikkim. These images resulted from surveys that involved a range of methods inclusive of interviews with local communities about the presence and status of tigers and other mammals, sign surveys to detect wildlife presence and camera trapping. It was undertaken in select areas across North and East Districts of the state.

These tiger images from North Sikkim are significant for a number of reasons. These are the most authentic photographs of the species from this district in recent times. Based on these photographs, it is established that there is presence of at least two different individual tigers in the area. One of these animals, a male, was photographed at an elevation of 3600m which is one of the highest altitude that tigers have been recorded at, in India so far.

While tigers have likely always occurred in Sikkim, albeit at low densities, very little is known about their status and distribution. Tigers are widely distributed across Himalayan forests in neighbouring Bhutan, and have been reported from the Dooars and the Neora valley region of North Bengal. The confirmed presence of the species in North Sikkim suggests that the species has persisted across the larger landscape.

Yet there are many questions: are these individuals dispersing tigers, or are they resident in the area? How many tigers does north Sikkim hold? And do these tigers move between forests in Sikkim’s other districts, northern part of West Bengal and Bhutan? It is clear that the pristine forests and alpine habitats of North Sikkim are immensely valuable habitats for threatened wildlife. FEWMD and WWF India are committed to further enhance understanding of these tiger populations in collaboration with different stakeholders to conserve tigers, co-predators and prey and their habitats both within and outside the State’s Protected Areas. 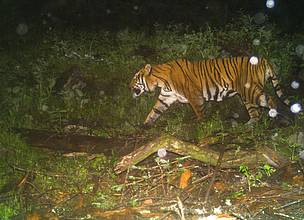 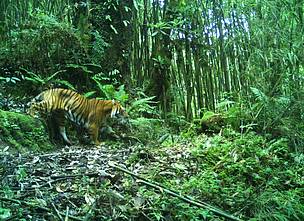