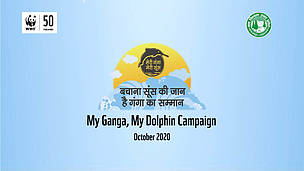 Lucknow: Shri Sunil Pandey, IFS, Principal Chief Conservator of Forests (Wildlife) and Chief Wildlife Warden, Uttar Pradesh Forest Department, who chaired the closing ceremony of the My Ganga My Dolphin campaign 2020, announced that this campaign will be rolled out in Uttar Pradesh next year. He also announced the constitution of a Dolphin Task Force for the Ganga River Dolphin to enhance protection of India’s National Aquatic Animal and the creation of a network of Dolphin Mitras to strengthen engagement with local communities and other stakeholders.

‘My Ganga, My Dolphin’ Campaign’, was conceptualised in 2012 by the Uttar Pradesh Forest Department and WWF-India to commemorate the 3rd anniversary of the Government of India's decision to declare the Ganga River Dolphin as our 'National Aquatic Animal'. The key objectives of the campaign included engagement with local stakeholders; raising awareness as well as building capacity on the actions needed to conserve river dolphins; and generating baseline information on dolphin populations using a unified methodology. Over the years, this campaign has taken the shape of a collaborative exercise to celebrate river dolphins.

While discussing the outcomes of this year’s campaign, Shri Sunil Pandey, PCCF (Wildlife) and CWLW said, “The presence of 41 dolphins is an encouraging sign, and now that we have a baseline, conservation efforts need to be stepped-up to eliminate all the threats in collaboration of the local communities.” ‘My Ganga, My Dolphin Campaign’ reported the presence of 22 dolphins in the year 2015 and 35 during 2019 in the same stretch.
Shri Pandey added that, “UP is the only state in India to conduct state-wide campaigns in 2012 and 2015.” He congratulated the seven Forest Divisions for continuously engaging in the campaign for the last 5 years. Shri Sanjay Shrivastav, APPCF (Eco Development), said, “In order to strengthen the conservation initiatives, the Management Plans of Hastinapur Wildlife Sanctuary and Upper Ganga Narora site will have dedicated sections on Ganga River Dolphin conservation”.

Shri. NK. Janoo, Chief Conservator of Forest, Meerut Zone in his opening remarks said, ‘One of the key outcomes of the My Ganga, My Dolphin’ Campaign has been the enhanced capacity of the Forest Department and Mitras for undertaking a scientific species survey. Also, the main focus of the campaign has been to engage with the local communities.”

“My Ganga, My Dolphin’ Campaign, has been successful in connecting with local communities and generating awareness on species conservation. The way UP has led this campaign in terms of methodology, consistency and leadership, can be a model for the rest of the country”, said Shri. Ravi Singh, SG & CEO WWF – India.

About Ganga River Dolphin
The Ganges River Dolphin (Platanista gangetica) locally known as “Susu" or “Soons” is known as the ‘Tiger of the Ganges’ since it has the same position in a river ecosystem as a tiger in a forest, its presence indicating a sign of a healthy river ecosystem. It is one of the most charismatic mega-fauna found in the densely populated areas, the Ganges-Brahmaputra-Meghana and Karnaphuli-Sangu river systems of India, Nepal and Bangladesh. The recent population estimates are about 3500 individuals in its distribution range of which more than 80% lies within Indian territory. The mammal prefers to stay in deep waters in and around the confluence of two or more rivers, sharing its habitat with crocodiles, freshwater turtles and wetland birds many of which are fish eaters and are potential competitors for their prey base.

WWF – India’s Dolphin Conservation Programme
WWF – India’s Dolphin Conservation Programme was established in the year 2000 in the Upper Ganga River Stretch in Uttar Pradesh to contribute to the preservation of the species and its habitat, through scientific research, community led conservation, biodiversity monitoring, policy advocacy, communications and outreach. In 2005, an 82km stretch of Ganga in Narora, Bulandshahr District; Uttar Pradesh was designated as a riverine Ramsar site for the protection of the Ganges River Dolphin. WWF-India has been closely working with State Governments, the National Mission for Clean Ganga (NMCG), Ministry of Environment, Forests & Climate Change(MoEF&CC) and other stakeholders to devise the Dolphin Action Plan 2010-2020. WWF-India, in collaboration with the Uttar Pradesh Forest Department and under the aegis of the State Government has been conducting the species distribution and population assessment as part of the ‘My Ganga, My Dolphin Campaign’. WWF – India has been working to address one of the key threats for Ganga Dolphin, lean flows. Jointly with the UP Water Resources Management and Regulatory Commission (UPWaMREC) and partners like State Water Resources Agency, Uttar Pradesh, C-Ganga, IIT Kanpur, National Bureau for Fish Genetic Resources, People Science Institute, WWF – India is engaged in an assessment of environmental flows for 8 major rivers in UP. Many of these rivers are also habitats of Ganga Dolphins and motivation of environmental flows in these rivers are also determined by the habitat requirements of the species.

‘MY GANGA MY DOLPHIN’ CAMPAIGN
© WWF India Enlarge
Like this article?