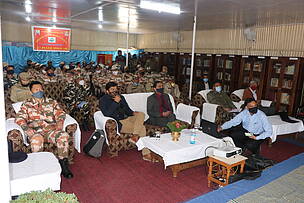 © Sashastra Seema Bal (SSB)
New Delhi, India: Organised wildlife crime needs an organised response. In light of this, TRAFFIC brought together various law enforcement agencies whose mission it is to stop poaching and illegal trade of protected wildlife in the Himalayas, at a one-of-a-kind training programme.

On 2-3 March 2021, more than 80 enforcement officials of Uttarakhand Forest Department, Police, Indo-Tibetan Border Police (ITBP) and Sashastra Seema Bal (SSB) attended a capacity building workshop to enhance their understanding of wildlife trafficking and strengthen their skills in wildlife law enforcement in India. The workshop was organised by TRAFFIC in collaboration with the United Nations Development Program (UNDP) and Uttarakhand Forest Department at an SSB’s camp in Didihatt near Pithoragarh Uttarakhand.

Wildlife Institute of India (WII), Wildlife Crime Control Bureau (WCCB), and TRAFFIC planned and conducted the training sessions where participants were given an update on the latest trends in illegal wildlife trade, information on the repercussions on our ecosystem, common illicit wildlife trade routes, modus operandi of traffickers and smugglers, commonly traded wildlife derivates, how to identify wildlife contrabands, use of forensics for collection of evidence and other related subjects on curbing wildlife trafficking.

Some sessions gave greater insight to help officials understand and implement the various sections of the Wildlife (Protection) Act 1972, including forest officers' powers, offences, and procedures.

Divisional Forest Officer of Pithoragarh, Dr Vinay Bhargav stressed the need for inter-agency training as seamless coordination between the forest department, police, and paramilitary forces is crucial to curbing wildlife crime in the region and across borders.

Head of TRAFFIC’s India Office, Dr Saket Badola, gave an insight into the new tools available for tackling illegal wildlife trade both offline and online such as for enabling traceability in forest produce, linking seizures to cartels using DNA profiling, fingerprint analysis, using aerial technologies like PandaSAT among others. He further emphasised the need for different agencies to develop and implement joint strategies for curbing wildlife crime that is not restricted to any region.

Deputy Commandant of 11 battalion SSB, Mr S P Tondup, thanked TRAFFIC and UNDP for conducting such an inclusive workshop in a remote location as Didihat. He said, “Such trainings should be conducted more often for border forces, so curbing wildlife crime becomes one of their main fieldwork. The shared information benefits all the participants and that ITBP and SSB play a crucial role in combating the illegal wildlife trade in the region”.

For any queries, please contact Dilpreet B. Chhabra, Senior Manager-Communications, TRAFFIC’s India office at dilpreet.chhabra@traffic.org or at 09899000472.

The Himalayas extend across eleven Indian states and Union Territories. This region is a biodiversity hotspot as it accounts for nearly 50% of India's total flowering plants, of which nearly 30% are endemic to the region. Out of the country's total mammalian species, 65% are recorded in the Himalayas;50% of the country's total recorded bird species occur in the region, and likewise 35% reptiles, 36% amphibians and 17% fishes are documented from the Himalayan mountain ecosystem. Owing to these vast natural resources, Himalayas are on the radar of wildlife poachers and traffickers who smuggle illegal wildlife contrabands across states and international borders. 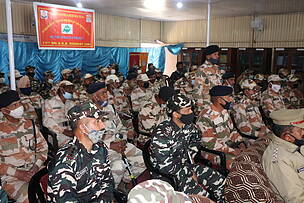 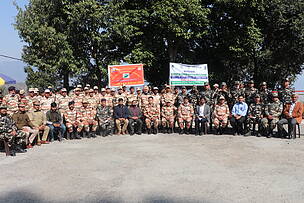