THREATENED BY SUPERSTITIOUS BELIEFS AND PRACTICES: OWLS OF INDIA 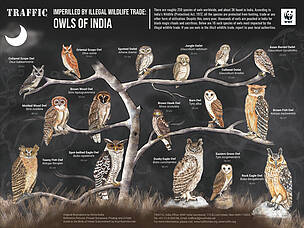 
Every year, as India celebrates the festival of Diwali, owls suffer in large numbers as they become victims of illicit and superstitious beliefs and rituals promoted amongst the unsuspecting public by local mystic practitioners. Owls are trapped and traded for ritual sacrifices, and these sinister activities usually peak around the festival of Diwali.

Every year, owls are sacrificed for mystic rituals and practices especially in smaller towns and villages where owl parts such as the skull, feathers, ear tuffs, claws, heart, liver, kidney, blood, eyes, fat, beak, tears, eggshells, meat, and bones are prescribed for ceremonial pujas and rituals.

Lack of awareness about owls leading to misbeliefs and the limited capacity of enforcement agencies to identify them in illegal wildlife trade has made this illicit activity challenging to detect and curb. Therefore, to bridge these gaps and support owl protection and conservation, TRAFFIC and WWF-India have produced and shared identification (ID) tools in the form of posters and ID cards in English and Hindi with the enforcement agencies and the general public.

Dr Merwyn Fernandes, Coordinator, TRAFFIC’s India Office adds, “Owls are nocturnal hunters and play a crucial role in balancing the ecosystem. They are considered friends of farmers, keeping rodents and other agrarian pest populations in check. Owls also have a strong cultural significance as a vehicle of Goddess Lakshmi. Despite such strong relevance, superstitious and manipulated beliefs have created a demand for owls that threatens its future”.

Knowledge and awareness generation is crucial to removing misunderstandings related to owls, as their poaching and trafficking rest on the wings of superstition. This Diwali, let there be a victory of knowledge over ignorance for the owls in India.