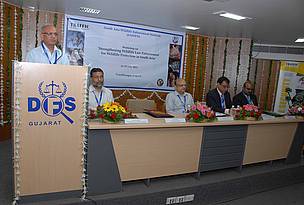 SAWEN workshop
© GFSU
Gandhinagar: Under the aegis of the newly established SAWEN (South Asian Wildlife Enforcement Network), a training programme on “Strengthening Wildlife Law Enforcement for Wildlife Protection in South Asia” commenced today at the University of Forensic Sciences, Gandhinagar, Gujarat. It was inaugurated by Shri Balwant Singh, Additional Chief Secretary, Govt. of Gujarat and is the first such training to be organized for SAWEN members on wildlife law enforcement.

Senior-level government officials working in the field of wildlife conservation of South Asian countries— Afghanistan, Bangladesh, Bhutan, India, Maldives, Nepal and Sri Lanka—are attending the programme which has been organized by TRAFFIC with support from the Global Tiger Forum, the Directorate of Forensic Sciences, Govt. of Gujarat and the Gujarat Forest Department.

Participants will receive a comprehensive understanding of the present scenario of wildlife crime and trade in South Asia and its implications for field conservation and be introduced to the modern tools and techniques used in strengthening wildlife law enforcement.

The programme brings together various national and international experts and agencies working in this field to exchange ideas, experiences and knowledge on curbing illegal wildlife trade. This initiative will help further strengthen regional collaboration amongst various South Asian countries and wildlife law enforcement agencies across the region.

A message by Hon. Chief Minister, Gujarat, Shri Narendra Modi read out at the inaugural session said, “I welcome all wildlife experts representing various countries to the State of Gujarat. It is high time that the law enforcement agencies’ focus is diverted towards prevention and detection of crimes. Gujarat State has taken lead in this direction by establishing an important branch called “Wildlife Forensics” at the State Forensic Laboratory. I compliment SAWEN Secretariat for organizing this workshop”.

Shri Balwant Singh, Additional Chief Secretary, Govt. of Gujarat said, “I welcome all participants to the State of Gujarat. Illegal wildlife trade is a serious issue and requires concerted and well coordinated action to curb it. The newly formed South Asia Enforcement Network should help in this direction”.

In a message by Hon. Minister of Environment and Forest, Govt. of India, Shri Jairam Ramesh said, “The establishment of SAWEN is a very crucial, timely and much needed step forward to institutionalize the collaborative efforts of member nations in controlling wildlife crime in the region. I am especially happy to note that under the SAWEN work plan, the first multi country training programme on Strengthening Wildlife Law Enforcement for Wildlife Protection in South Asia is being held in Gandhinagar. Gujarat has some very good successes to share in this direction”.

The message also said, “I welcome all participants from across South Asia to India and congratulate the SAWEN Secretariat and TRAFFIC India for taking the lead in organizing this workshop and also commend all partners for their support to this important theme”.

Mr Krishna Prasad Acharya, Chief Enforcement Coordinator of SAWEN & the Director General, Department of National Parks and Wildlife Conservation, Nepal said, “Illegal wildlife trade is a form of trans-national organized crime that threatens many iconic species across the world. National Governments in South Asia recognise this threat and are committed to work together to counter such threats. The establishment of the South Asia Wildlife Enforcement Network (SAWEN) by the eight countries of South Asia in Bhutan in January 2011 is an expression of this commitment. This training programme, the first of its kind under SAWEN, will support our common cause and will surely be the first of many more such collaborative efforts.

Dr J.M. Vyas, Director General, Gujarat Forensic Sciences University, Gandhinagar said, “We welcome the participants to our University and are happy to host this important training. We are happy to share our experiences in this field. Our state of art laboratories and highly trained staff will help participants in understanding the subject better. Wildlife crime is a serious issue and requires a learned, scientific approach to combat it”.

Mr Samir Sinha, Head of TRAFFIC India said, “South Asia, acknowledged globally as a biodiversity rich region, is increasingly being targetted by organised transnational criminal syndicates. Wildlife crime itself continues to change and evolve rapidly in today’s world. In fact, with rapid changes in the way the world communicates, especially with the internet and the easy access to international travel, illegal wildlife trade continues to acquire new dimensions and forms. The fight against organized trans-national wildlife crime requires a multi-disciplinary intelligence-led approach in order to disrupt criminal activities effectively. This training will help wildlife law enforcement agencies across South Asia prepare better to respond to such crime”.

About South Asia Wildlife Enforcement Network (SAWEN)
The South Asia Wildlife Enforcement Network (SAWEN) was recently launched at an inter-governmental meeting hosted by the Royal Government of Bhutan on 29–30 January 2011 in Paro. All eight countries of South Asia are members of SAWEN. With this, a new chapter has been opened in regional cooperation in South Asia for strengthening wildlife law enforcement. The SAWEN Secretariat is based in Nepal and currently headed by the Director General, Department of National Parks and Wildlife Conservation, Govt. of Nepal.

About TRAFFIC India
TRAFFIC is the world’s largest wildlife trade monitoring network and a joint programme of WWF, the conservation organization and IUCN-the International Union for Conservation of Nature. It was established in 1976 and since then it has developed a considerable international reputation for helping to identify and address conservation challenges linked to trade in wild animals and plants.

In India, TRAFFIC carries out research and provides analysis, support and encouragement to efforts aimed at ensuring that wildlife trade is not a threat to conservation of nature in India. TRAFFIC-India works as a programme division of WWF –India, the largest conservation organization in India.

About Gujarat Forensic Sciences University
Gujarat Forensic Sciences University was established by the Govt. of Gujarat as a super specialized University which is unique and first of its kind in the world for conducting regular/online Degree/Diploma/Certificate courses in the field of Forensic Science, Behavioral Science, Criminology and other allied areas. It is situated at Gandhinagar, the capital of Gujarat. One of the main objectives of the University is to create technically skilled manpower in the field of forensic science and behavioral science which is a need of the hour as presently many countries including India are facing acute shortage of such competent experts. This university aims to cater to the needs of various investigating and security agencies in addition to academic institutions.