Status of Tigers in the Sundarban Biosphere Reserve 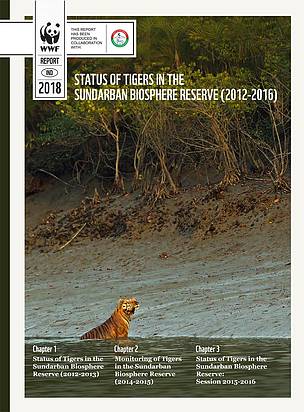 The transboundary area of Sundarbans located in India and Bangladesh is the only coastal wetland tiger habitat in the world. This mangrove forest has been recognised as a wildlife conservation area of regional and international importance and has been identified as Level I (18) Tiger Conservation Unit (TCU).

The fauna of the Sundarbans, particularly the  Bengal tiger (Panthera tigris) , is especially adapted to this difficult terrain which  is continually subjected to a variety of changes over time, including variable salinity regimes, periodic high and low  tides and tidal inundations, occasional tidal surges and frequent flooding, among others.

From 2012 to 2015, WWF-India monitored the tiger population of Sundarban Biosphere Reserve and the summary of the findings has been combined into three chapters.

Chapter 1 presents the outcome of the camera trapping exercise in Sundarban Tiger Reserve to establish the baseline for tiger population. This chapter also provides insights to the factors (tidal rhythmicity, topography, habitat formations, prey-base occurrence and olfactory lures) governing the captures of animals in the aforementioned area using camera trap-based Mark-Recapture framework. This report recommends significant ecological and management strategies to be implemented in the area for long term survival of the tiger population.

Chapter 2 presents the outcome of the camera trapping exercise in two areas of SBR, in line with Phase-IV monitoring protocol of National Tiger Conservation Authority (NTCA), Government of India. Along with population parameter estimates, the chapter also provides insights into the variations occuring in the individual movement pattern, which ultimately helped in taking better management decisions and updating the dataset of 2012 and 2014.

Chapter 3 presents the outcome of the first ever camera trapping exercise in all tiger bearing habitat of SBR within a single season to provide robust estimate for tiger population in Sundarbans of India. This chapter looks into various unexplored parameters of the target population and recommends significant ecological and management strategies to be implemented in the area for long term survival of the tiger population.