CONSERVING WETLANDS IN THE GANGA BASIN 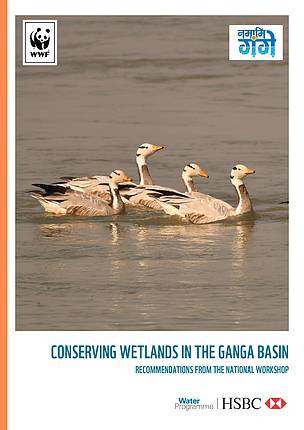 Report cover
© WWF-India
Wetlands are one of the most crucial sources of freshwater and one of the most productive ecosystems on the planet. The Gangetic wetlands are the largest riverine wetland system in India. National Mission for Clean Ganga (NMCG) and WWF-India jointly published a report that presents four-year action plan drawing on the Ganga Basin Environment Management Plan (2015), Ganga Authorities Order (2016) and the Wetland (Conservation and Management) Rules 2017 to achieve four objectives for the wise and sustainable use of wetlands in the Ganga basin: Wetlands provide many ecosystem services such as surface and groundwater recharge, flood and drought mitigation, nutrient recycling, biodiversity and several economic services. India is rich in wetland diversity nearly 3.66% of the country’s geography, i.e. 11.69 Mha, is covered under wetlands. An integral part of the Central Asian Flyway, the Ganga basin has seven Ramsar sites, it supports numerous nationally important wetlands, high altitude wetlands of Uttarakhand, rural and urban wetlands.

The report is an outcome of a workshop jointly organized by NMCG and WWF-India with aim to initiate a dialogue on wetland-river interconnectedness, and draw upon the experiences and knowledge of participants to prepare a roadmap for integrating and mainstreaming wetland conservation in the Ganga River Basin Management Plan. More than 60 wetland managers, experts, academia and decision makers collectively designed a set of recommendations, which will be acted upon by respective agencies.