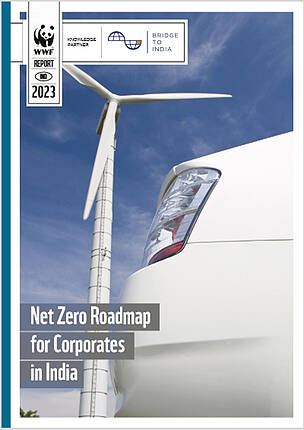 Net Zero Roadmap for Corporates in India
© WWF India
The increasing incidence of extreme climate events has raised concerns globally about our collective future. Besides the environmental damage to the planet and declining biodiversity, it has also led to economic difficulties, and in particular the most vulnerable population in developing countries. For India, decarbonisation is critically urgent because of strong vulnerability to climate change. In addition, to grow the economy and improve the living standard for its citizens, it is expected that India’s energy needs will increase in future. In fact, a recent study shows that demand could grow by more than 3% annually from now till 2030 due to urbanisation and industrialisation. While the Indian Government has been proactive, setting a Net Zero Target by 2070 and ambitious Renewable Energy targets for 2030, another crucial stakeholder segment would be Commercial and Industrial consumers. Corporate entities in India are responsible for around half of India’s total energy consumption, and this percentage is expected to rise further by 2030, are crucial to meeting these decarbonisation targets. Faced with competitive pressure, investor pressure and reputational concerns, leading corporates have already started taking voluntary action. However, the path to Net Zero appears to be nebulous for a large number of entities.

To address these challenges and pave a path forward, WWF India has developed a Report on ‘Net Zero Roadmap for Corporates in India’. This report, developed after extensive consultation with Corporates, Governmental Agencies and Civil societies in India seeks to provide a clear and immediately executable Roadmap for Corporates in India. Based on these stakeholder interactions and primary research on the current trends in sustainability and climate action, this report identifies both the drivers and barriers for decarbonisation by Indian Corporates. Interestingly, most of the surveyed companies with commitments emphasize maintaining competitive edge, corporate reputation and growing investors preferences over governmental mandates. Despite the bold intent, however, absence of transparent standards, lack of a clear policy framework, high upfront cost, lack of technical expertise and nascent state of some key technologies are seen as key barriers in the path to net zero.

This report emphasises the need for a multi-pronged approach encompassing a range of abatement options including reduction of resource intensity, replacement of emitting sources and offsetting emissions from hard-to-abate sources. While some of these options like renewable energy and energy efficiency have matured in recent years, others like battery storage, green hydrogen and carbon capture are in nascent stages. This report seeks to establish some essential principles for developing a roadmap that are consistent across sectors.  This report can help to catalyse action among C&I players, and push Net Zero to be the standard practice in the future.