Sacred Groves: A repository of floral and faunal wealth 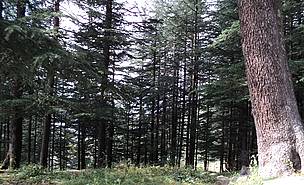 Sacred Groves: A repository of floral and faunal wealth
© WWF-India
Sacred groves are a major component of environmental protection in many areas. The concept seems to have emerged in traditional societies where people attached sacredness to various species. Unknowingly, such traditional and cultural attitudes have made a significant contribution towards conserving these plant species.

In Himachal Pradesh, the local myths and legends associated with sacred groves go a long way in preserving the forests from destruction. There are several groves dedicated to a particular deity (called Dev Van or Devta Ka Jungle) where one is not allowed to cut trees or even carry dry leaves out side the area. Many plants and animals are also considered to be sacred At higher altitudes, the sacred groves have Cedrus deodara as dominant species with a few associated species viz. Pinus roxburghii, Pinus religiosa, Quercus semicarpifolia, Juniperus sp. etc. while in other areas the dominant species include Shorea robusta with some associated species viz. Popular ciliate, Acacia catechu, Cassia fistula, Tectona grandis etc. The thick forests provide a good habitat for leopards, barking deers, ghorals, black bears, hares, wolves and many more.

The sacred groves thus play a significant role in in situ conservation of biodiversity. They are a natural gene pool and act as a repository of rare and endemic species. They harbor plants of great ethno-botanical importance. The high density of plants also helps in soil and water conservation.
However, the developing market economy, increasing demand and unscientific exploitation of natural resources has adversely affected the health of these sacred groves. The traditional practices of conservation by community participation are also deteriorating. It has hence become imperative to restore the cultural and natural heritage of the Himalayas. It is in this regard that a three year project, “Documentation of sacred and protected groves of Himachal Pradesh and their woody flora” was undertaken which is being funded by G.B. Pant Institute of Himalayan Environment and Development, Almora. 378 sacred groves were documented from Kinnaur, Kullu, Solan, Sirmour, Mandi and Shimla in the first year.