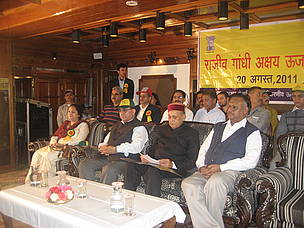 © WWF-India
Rajeev Gandhi Akshay Urja Divas is celebrated each year on the birth anniversary of Rajeev Gandhi. WWF-India along with Himurja- a nodal agency of the Ministry of New and Renewable Energy in Himachal Pradesh, has been organizing events and activities for students with the aim to sensitize them to the immediacy to switch to renewable sources of energy, for the past eight years. Observing Rajeev Gandhi Akshay Urja Divas 2011, a programme around the theme of energy conservation was organized by Himurja in collaboration with WWF-India for school students.

200 students from 18 schools of Shimla participated in various competitions including slogan writing, poster making as well as paper presentation on August 18th, 2011. Ms. Vandana Thaplyal, State Director, WWF-India, emphasized on the need to conserve energy and shift to alternate sources of energy in her welcome address. Mr. Harsh Mitter, CEO, Himurja, in his speech, highlighted the role of schools in disseminating the message of energy conservation. Through the activities, the students expressed their views on energy conservation, energy crisis, renewable sources of energy, energy requirement and its demand.

600 students from 18 schools participated in an awareness rally on energy conservation that was organized on August 20th, 2011 and was flagged off by the Chief Minister of Shimla, Prof. Prem Kumar Dhumal. He addressed the students on the need to use natural resources in an apposite manner and avoid their exploitation. He emphasized on the need to make use of renewable sources of energy in our daily life. He congratulated the children for participating in the programme and appreciated their paintings and slogans. 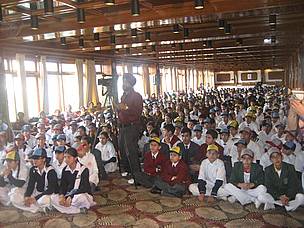