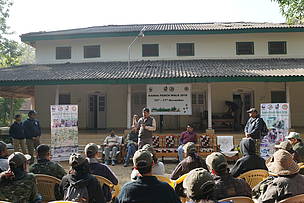 Shri Subharanjan Sen, Field Director - Pench Tiger Reserve, Madhya Pradesh addressing the participants on the first day of the Kanha-Pench Walk 2016.
© Pooja Chowdhary/WWF-India
Kanha Tiger Reserve| Madhya Pradesh: The third edition of the much awaited Kanha-Pench Walk 2016 came to an end on 17 November in Khatiya village on the buffer of the Kanha Tiger Reserve. An annual event, the walk is jointly organized by WWF-India and the Madhya Pradesh Forest Department. The walk primarily aims to build awareness on the importance of conserving the Kanha-Pench corridor which connects two major tiger source populations in Central India, and is one the most crucial tiger conservation units globally.

About 28 enthusiastic individuals transcending all age groups from different states of Delhi, Uttarakhand, Rajasthan, Maharashtra, Telengana, Madhya Pradesh, and Chhattisgarh along with forest officials and WWF-India team members participated in the walk this year. The walk was flagged off by Shri Subharanjan Sen, Field Director- Pench Tiger Reserve, Madhya Pradesh, and Dr. Dipankar Ghose, Director – Species & Landscape Programme, WWF-India on 10November at Rukhad – a  village in the periphery of the Pench Tiger Reserve. Over a period of eight days, the participants walked through one of the most important corridors connecting the Pench Tiger Reserve and Kanha Tiger Reserve.

During the walk, participants travelled through villages such as Navegaon, Dundelkheda, Hirritola, Kalimati, Banjari, Massanbarra, Turur, Bharveli, Jhangul before reaching the Khatiya Eco Centre on the final day. The trails followed during the walk are often used by wildlife such as tigers, leopards, Indian bison, cheetal, sambar and sloth bears. The area is also home to breeding tigers and a variety of other wildlife species. Along the stretch the participants were excited to spot plenty of wildlife signs such as tiger pug marks, sloth bear, leopard and tiger scat besides a variety of avian species, spiders and more than 25 butterflies.

The participants also closely interacted with many communities that lived along the route. They gained insights into the agricultural practices followed by the communities, the cropping pattern, various challenges faced by them and concerned forest officials in managing human-wildlife conflict and many other such topics. Aparna Pal Chauhan, one of the participants said, “An important aspect of the forest is the presence of forest dwelling communities within the corridor. This walk helped me in understanding the integral role they play in the conservation of the forest.”

The Kanha-Pench Walk 2016 was not only punctuated by many informative and educative experiences, it has also been successful in garnering support and participation for conservation drawing individuals from various walks of life. 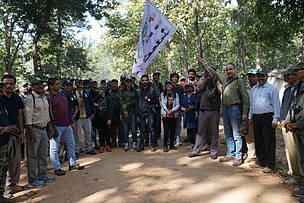 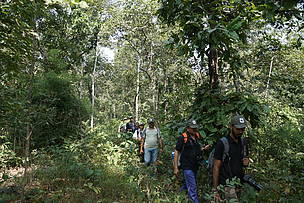 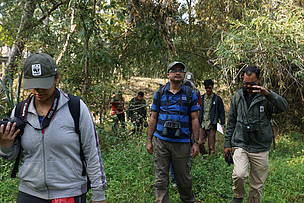 Shri Dhanraju S, IAS, District Collector of Seoni walking with the participants from Banjari Sonkhar to Masanbarra on the fourth day of the Kanha-Pench Walk.
© Pooja Chowdhary/WWF-India Enlarge 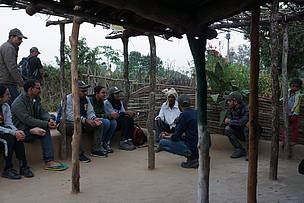 Participants interacting with the communities in Dundalkheda village at the end of the second day of Kanha-Pench Walk.
© Pooja Chowdhary/WWF-India Enlarge