The tigress under observation soon after capture
© Ratul Saha/WWF-India

On the afternoon of 2 March 2013, the forest staff of Sundarbans Tiger Reserve in Sajnekhali Wildlife Sanctuary sighted an ailing sub-adult tigress. The tigress was observed to be struggling to walk and was found to be hopping instead of the normal striding motion used by tigers. To determine the problem affecting the tigress and treat the same it was captured by forest staff late in the evening on 4 March under direct supervision of the Field Director. A team comprising senior veterinarians formerly from Kolkata’s Alipore Zoo, West Bengal Forest Department and NTCA Schedule I Animal Handling Committee members as well as WWF-India staff then observed the tigress but could not discern any external injuries. However, since the team observed a discomfort in the tigress while sitting on its haunches they recommended pathological tests and an X-ray be conducted of the tiger to determine if its hind and leg bones had any injury or internal defects.

As an X-ray of a wild tiger within the habitat had never before been attempted in India, this posed significant practical challenges. However, the West Bengal Forest Department and WWF-India managed to convince a Kolkta-based diagnostics clinic to use their mobile x-ray machine meant for human use for x-raying the tigress!

After much effort, the x-ray was successfully undertaken on 12 September 2013. However, the X-rays did not detect any internal abnormalities in the pelvis, hip joints and leg bones of the tigress nor did the pathological tests detect pathogens. But as the tigress was still weak the team recommended that it be kept under observation in special enclosure in the Sajnekhali Wildlife Sanctuary’s range office until it was fit for release back in the wild.

To enable effective and secure monitoring of the tigress, the Sundarbans Biosphere Reserve Directorate with WWF-India’s active support devised a 24x7 monitoring system using CCTV. Since this would be only the second attempt in India to rehabilitate a tigress in the wild, a surveillance camera system would generate a wealth of information that will help decide whether the animal is capable of going back into the wild.

“This exercise enabled us to understand the challenges of diagnosing and treating a wild tiger. This experience will help us in future if similar methods have to be used for other sick wild animals”, said Dr. Anurag Danda, Head, Climate Change and Adaptation and Sundarbans Programme, WWF-India.

WWF-India continues to work with the West Bengal Forest Department to observe the recovery process of the tigress, which is progressing at a good rate. Based on it, a decision will soon be taken on releasing it back into the wild. 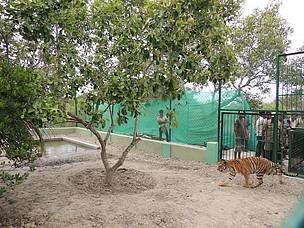 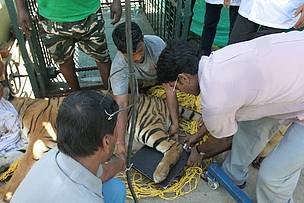 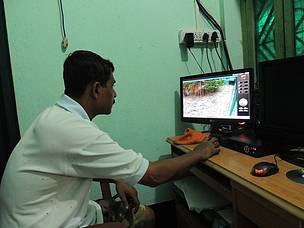 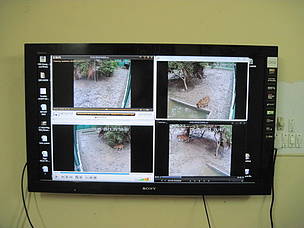