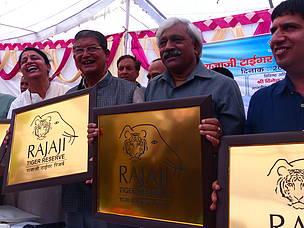 Several factors outline the importance of Rajaji in TAL. A crucial factor is its location—Rajaji is home to the western-most tiger distribution in the Terai. Potential tiger habitat extends further west of the forest for another 4000 sq. km. but the area lies in want of the big cat as protection ceases at the fringes of Rajaji. Denoting the national park a tiger reserve will ensure a greater protected area that extends beyond the core. That might open up new lands further west for tigers to inhabit.

In addition to protection, management of the reserve will undertake a drastic conversion as a Tiger Conservation Plan is put in place. Tigers will now take the spotlight in determining how the forest is managed and monitored. Funding for monitoring, enforcement and infrastructure will be released by the Central Government in exchange for increased accountability and responsibility. WWF-India will participate in drafting the Tiger Conservation Plan.

WWF-India has played a pivotal role in advocating for improved protection of the park. The organization’s two-pronged approach involved active lobbying for the park’s Tiger Reserve status with stakeholders ranging from politicians to local communities, and providing infrastructure support and skill-training to ensure that stringent protection standards for a tiger reserve could be met. To ensure undisrupted patrolling in any season, WWF-India provided summer, winter and rainy season uniforms, hiking boots and LED torches to all 250 frontline staff. The organization supported patrollers with four four-wheel drive vehicles (two each for western and eastern Rajaji) to ensure effective mobility in a difficult terrain, and ten motorcycles, 25 bicycles, and a tractor for mobility in interior forest camps. Also noteworthy was WWF’s contribution of patrolling equipment—including sleeping bags, first-aid kits, tents and food rations— that enabled staff to patrol for extended periods of time.

But, perhaps, WWF-India’s biggest impact is the one that comes without a price tag. Dr. I.P.Bopanna trained all Rajaji frontline staff in skills that were vital for protection but previously unknown to them. Law-enforcement monitoring, field craft, GPS-based patrolling and techniques, camera trap techniques and wildlife monitoring, were subjects covered in over 17 workshops. WWF gave camera traps, GPS systems, and digital cameras to patrolling units.

To ensure that all stakeholders would receive Rajaji’s new status with delight, WWF-India equipped local communities with strategies that could reduce their dependence on the forest. Increased protection limits entry and movement in the forest, which has an impact on the amount of fuel wood villagers have access to. Driven by foresight, WWF-India has provided biogas plants and access to LPG connections in two villages in Rajaji.

On the ground, WWF-India has been working with Wildlife Institute of India and park officials in monitoring the tigers in the forest. WWF-India will strengthen its commitment for conservation of tigers and their habitat in the newly notified Rajaji Tiger Reserve. 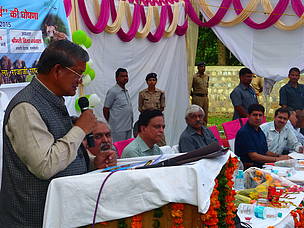