The indomitable spirit of a forest staff in Corbett Tiger Reserve 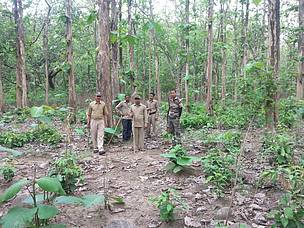 Jai Kishen (standing in the centre) during one of the long range patrolling duty in Corbett TR
© Chander Singh Negi/WWF-India
Corbett Tiger Reserve| Uttarakahand: On 19th July 2015, at day break, Jai Kishen began his routine patrolling duty with two of his team members in Gairal area of Sarpduli Range in the Corbett Tiger Reserve. A diligent and an able forest staff of the Corbett TR, Jai Kishen began his day just as he has been doing for the last 12 years.
Ready to work under any weather conditions and through difficult terrains, patrolling across the core area of the Tiger Reserve had become his way of life. However, 19th July 2015, turned out to be different.  Jai Kishen was mauled by a tiger at around 0600 hours. The attack left him severely injured causing serious injuries in his lower abdomen, legs and back.

The incident was immediately reported to the Deputy Director - Corbett TR, Dr. Saket Badola, who along with his team rushed to the spot and rescued Jai Kishan. Without any delay, he was taken to the nearest government hospital in Ramnagar and then referred to the Chamunda Nursing Home, Kashipur. The incessant rains delayed the journey and it took almost 10 hours to reach Kashipur from the accident site. Despite the seriousness of the injury, Jai Kishen braved it and responded well to the treatment at Kashipur where he was admitted under special supervision of the doctors for 19 days.

WWF-India supported Jai Kishen during this time of need and was with him throughout his treatment. The support also included providing him a token financial support of INR 25000/- towards his treatment.

The love for forest and wildlife, and his association with his duty for the past 12 years could not bring down his spirit for long. Soon after his discharge from the nursing home, he resumed his daily routine as a forest staff in the Corbett TR.

However, in the months to follow, Jai Kishen complained about pain in his lower abdomen. Understanding the criticality of the situation, Jai Kishen’s treatment was resumed by the Corbett TR on 24th November 2015 in Dr. Susheela Tiwari Government Hospital.

Mr. Ravi Singh, Secretary General and CEO of WWF-India, during his visit to the Corbett TR in February 2016, learnt about Jai Kishen and interacted with him. Given he was still in pain even after more than 10 months of treatment, Mr. Singh assured Jai Kishen that WWF-India would support him with all necessary assistance for receiving specialized treatment in New Delhi.

To address such issues of severe medical conditions, and provide specialized medical relief and support to forest staff, WWF-India has entered into a partnership with the Apollo Hospital Charitable Trust under the ‘Specialized Medical Care Scheme’, which came in handy in this case. Jai Kishen was brought to New Delhi and was operated for bilateral hernia on 11th May 2016 in the Indraprastha Apollo Hospital. The tiger attack almost 10 months ago could have caused bilateral hernia in Jai Kishen.  The treatment in Apollo was successful and he was advised adequate rest.

“I love my work as a wildlife protector in the Corbett TR and I am proud of what I do” says Jai Kishen. Our foot soldier, stands true to the saying ‘Once a soldier, always a soldier’!  Now completely recovered, and as high spirited as ever, Jai Kishen continues to work as a forest staff and patrols the vast swathes of the Corbett TR.