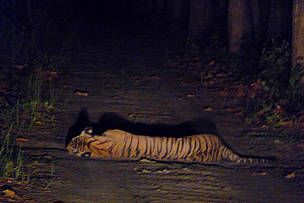 The night of 31 May 2010 was pleasant in the Terai forests of Pilibhit District. The temperature in the woods was comparatively lower than that in Pilibhit town. Accompanied by Mr. V.K Singh, Divisional Forest Officer of Pilibhit Territorial Division, I was coming back after concluding the day’s field work from Mustafabad Forest Rest House, where WWF-India’s team that took part in the camera trap studies was staying. WWF’s team was working alongside local forest officials to carry out the camera trap exercises. As part of the nation wide process to estimate wild tigers in India, camera traps were being used to ensure more accurate estimates.

The forest came alive in the night and the animal life became more active as darkness crept in. We saw herds of spotted deer (some having as many as thirty individuals), hog deer and many saunders of wild boars, which were in groups of six to eight individuals. We also saw a civet. One characteristic feature of Pilibhit’s forests is the presence of small scattered patches of grasslands amidst vast expanses of sal forests. Hog deer using sal forests to move in between the patches of grasslands can be frequently sighted.

It was 9.30 pm and we were driving through the Mahof range. We were pleasantly surprised to see a huge animal lying along the width of the road. We were thrilled. It was a tiger! The magnificent animal was sleeping on the road unaware of our vehicle’s presence. We took pictures and shot video for about three minutes. When the tiger realised our presence, it quickly woke up and vanished into the forest in less than five seconds.

The tigers of Terai region particularly the ones in Pilibhit, are very shy. Considering this, we were lucky to have seen it for so long and take pictures as well. Seeing tigers in the wilderness of Pilibhit gives a lot of satisfaction and gives credence that efforts of the Forest Department officials and WWF are helping them survive. 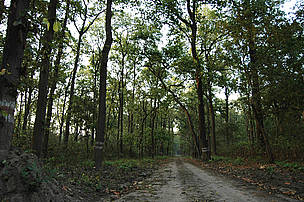