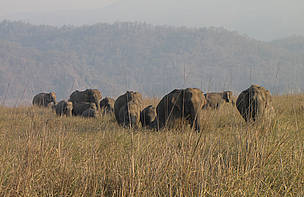 An unusual guest
It was mid-September and the season’s unusually heavy rains had just subsided. One morning we received a call around 9 from a farmer who said “Sahib ek haathi hamare kheth main ghus aya hai” (“Sir, an elephant has entered the farmland”). In turn, we quickly dialed the Sub Divisional Forest Officer (SDO) of Jaspur Sub Division in the Terai West Forest Division, who confirmed this incident.

The SDO requested WWF-India’s Terai Arc Landscape (TAL) team to reach the place at the earliest to support the efforts of the authorities to drive back the elephant and prevent any untoward incident - either to the humans or the elephant. As we rushed to the place we prayed all along that there should be no loss of life on either side. Three years ago, an adult wild tusker had strayed into human habitation in Roorkee area of the nearby Haridwar Forest Division . Huge crowds had gathered at the site, possibly blocking any escape routes to the forest for the animal. This lead to an avoidable conflict which saw several persons being injured and some unfortunately dead. The tusker was declared a threat to human life and finally shot dead.

We exchanged pleasantries with the SDO who thanked our team for reaching the place at such a short notice. He led us to the place and we climbed atop a roof to see a huge elephant hiding in the sugarcane fields. We estimated this pachyderm to be about 2.75 - 2.80 m in height as it was taller than the standing sugarcane shoots that were more than 2.5 m tall. Only the elephant’s back was visible to us but farmers informed us that it was a tusker.

The operation ‘drive back’
Until the late1930s Kashipur town was surrounded by dense forests that formed a part of the elephant corridor connecting Jaspur - Kashipur forests to River Baur. We interviewed some of the elders (age ranging 60-70 years) in the mob regarding elephant presence in Kashipur. But none of them remembered any such incidents during their lifetime.

But we had to know where this elephant had arrived from before attempting to drive it back. We got to know that for the past two years a male elephant was residing in Shivrampur, an isolated patch of forest close to Hempur army depot in Aampokhara range of Terai West forest division. This forest is about 25 km from Kashipur town. We rang up the forest chowki nearest to Shivrampur and requested the forester to come over quickly and ascertain if this was the same elephant. A couple of hours later he arrived, saw it and turned back to inform us that it was the one. Now we started analyzing the probable route taken by this elephant to reach Kashipur town, as this could probably decide its way back to the forest too. The forest department formed eight teams of its staff led by the Divisional Forest Officer (DFO), Terai West Division. These teams, along with that of WWF-India, were dispatched to the sites where the elephant was likely to move.

We requested the range office team to gather all possible information from nearby areas where elephant pads were seen. After getting the feedback, we concluded that this elephant had walked for miles along the banks of River Dhela and then went north towards Kashipur.

A safe ending to this unusual tale
We waited for sunset and as soon as the natural light disappeared we requested the farmers to fire their “Gandhi Banduk”. This is a country-made gun used by communities in farms near forest–edges to drive back wild animals that stray out of the forests. Around 9 pm the elephant started moving from the sugarcane field towards the National Highway (NH) 74. The elephant crossed the NH near Degree College and went to the other side of the town. This was a positive sign and was as per the plan as the elephant could find its way back into the forest. But it disappeared in the dark by 11 pm. We decided to return to Kashipur Range Office for dinner and wait for further field reports. We left behind one team in the agricultural fields to try and monitor the elephant’s movements.

When we returned, the team members informed us that they could not trace the elephant but were firing the Gandhi Banduk frequently hoping it would go back. We started following the elephant’s pad and traced it to the Chati Road. Around half past midnight, the pads traced to Gobishan Tilla an area restricted by the Archeology Department. We decided to call off the operation and come back in the morning.

Around five the next morning, we started off for the same place. We could now see that the elephant had damaged the walls of the archeological site’s restricted area and exited to the paddy fields. The elephant’s pads could be traced around the Kashipur main town (see map below).

It had passed through the main town near Sub Divisional Magistrate court and crossed the railway track on Ramnagar road and then moved out of the town. We were stunned that the elephant had entered such a populated area in the night. We could not have imagined the consequences if it had walked there in daylight.

The next day we searched for traces left behind by the elephant. We were relieved after we were informed that it had returned to the Shivrampur forest. One of the reasons for the prevention of loss of life of humans was the excellent support received from the local community throughout this operation. This incident can be a lesson if something similar happens again in the future.