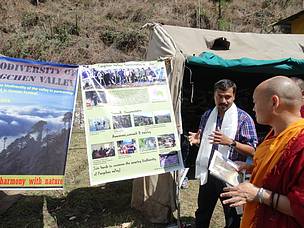 WWF-India’s WAL team interacting with locals at the Gorsam Festival in Arunachal Pradesh
© Rajarshi Chakraborty/WWF-India
The festival of Gorsam Kora is celebrated around the Gorsam Choten in Pangchen valley during the pre-monsoon period between February and April of every year in the state of Arunachal Pradesh. This celebration attracts people from the whole valley as well as from the district headquarters of Tawang and even from the neighbouring country of Bhutan to get blessings from the guru Rimpoche and for business purposes. It is without a doubt the most colourful event held in the valley.

This year, this festival was celebrated between 28 and 30 March 2014 and WWF-India’s Western Arunachal Landscape (WAL) programme took this event as an opportunity to showcase the rich biodiversity of the valley and spread the message of conservation among everyone who attended the festival.

At the festival, the WAL team installed a photo exhibition consisting of photographs from Community Conserved Areas (CCAs) and their surroundings. Each photograph carried a specific conservation message and highlighted the conservation work being carried out by WWF-India towards conserving the rich biodiversity of the valley. The photo exhibition received an overwhelming response from various segments of the community including government officials.

“This is a good initiative and I am sure this will eventually play a crucial role to enhance conservation awareness of the locals as well as motivate them to preserve the rich biodiversity in their backyard,” said Mr. Khoda Lasa, Circle Officer, Zemithang. “It is a good tool for education to our new generation,” he added.

During the event, WWF-India honoured the Late Mr. Pema Hrider, the former Gaonburah of Muchat village, who passed away last year, for his valuable contributions towards conservation of natural resources. He spearheaded the conservation effort in Muchat and other villages of the valley and was a regular member of the biodiversity monitoring and patrolling team. The dharma guru T. G. Rimpoche also visited the exhibition. “I am happy to see this vast diversity of the valley and especially photographs of the charismatic red panda,” said the Rimpoche.

In spite of the general elections, more than one thousand people from the valley and outside, including army personnel and school students, visited the exhibition and interacted with the WAL team.

“This is a good awareness initiative and even we want to organize such a programme in Tawang to get more public support towards conservation,” said Mr. Pradeep Wahule, Divisional Forest Officer- Tawang division. “I want to showcase this rich biodiversity among various stakeholders including the student community and administrator of the district,” he added. Mr. M. Nyori, the Additional Deputy Commissioner of Lumla also visited the exhibition and commended WWF-India’s conservation efforts.

Apart from the awareness programme, WWF-India also provided dustbins for proper waste disposal to the Gorsam Kora festival management committee in collaboration with the Environment Protection Society, an organization working for better environment in Tawang.

WWF-India’s WAL programme will continue to engage with local communities and stakeholders for the conservation of the rich biodiversity of Western Arunachal Pradesh. 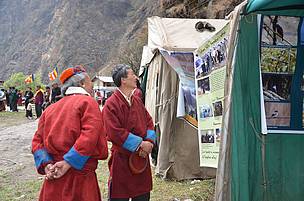