Pakke and Nameri are adjoining Tiger Reserves in the Indian states of Arunachal Pradesh and Assam respectively. Together, the landscape is home to a rich variety of flora and fauna including charismatic species such as the tiger, leopard, elephant, clouded leopard and the Asiatic black bear. The region is also home to several indigenous communities whose support is essential for conserving the region’s variety of wildlife.

WWF-India, through its Western Arunachal Landscape (WAL) and North Bank Landscape offices, has been engaged with the forest departments of the two states and local communities for conservation of the biodiversity in the area since 2010.

To garner wider support for conservation among the local communities a conservation peace rally was organised by the Ghore Aabhe Society, with support from Pakke Forest Department, WWF-India and other NGOs for the first time on 28th February 2013. The rally started from Seijosha in the Kameng district of Arunachal Pradesh to Tezpur in Assam. The main objective of the rally was to bring together the people in both states who share the landscape of Pakke-Nameri, to work for better management and conservation of both the Protected Areas. The conservation rally saw wide participation from the local communities including various students' groups and village headmen of Pakke. In total, about 200 people participated. The rally concluded with a valedictory function at the Ban Theatre in Tezpur that reinforced the importance of nature conservation.

"The wildlife of Pakke-Nameri Landscape need the support of the people of Assam and Arunachal Pradesh. We are dependent on the forests and wildlife and without them we cannot survive. The people of the two neighboring states may have varied interests and priorities, but that should not come in the way of conservation. This peace rally is the first time ever that we have come together in one platform to share our thoughts on conservation. I sincerely hope that this is only the beginning of a positive step to unite the people of two states for a noble cause of wildlife conservation," said Mr. Takum Nabum, Chairman, Ghora Aabhe.

WWF-India will continue to work with all the stakeholders for conservation of the Pakke-Nameri Tiger Reserves and also support such awareness building initiatives. 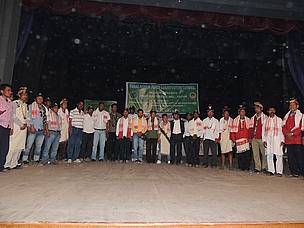 Some of the rally participants at the concluding function in Tezpur, Assam
© Pallabi Chakraborty / WWF-India Enlarge