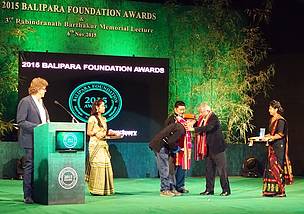 Guwahati: The Pangchen Lakhar Community Conserved Area Management Committee (PLACCAMC) set up by the villagers of Kharman and Kyalegteng, Tawang district, Arunachal Pradesh, has been awarded the acclaimed Balipara Foundation Award 2015. The Balipara Nature Conservancy Award -- awarded annually to a community or organization in recognition of their efforts in forest protection and restoration -- was bestowed upon PLACCAMC in recognition of their commendable work, foresight and unified efforts in conserving community-owned forests in the region.

The Balipara Foundation, a not-for-profit organization, has been working towards documenting, analyzing and promoting the concept of economics in line with the imperatives of nature, for nearly a decade. The Foundation has been recognized for its vision and work by several renowned economists and organizations globally.  The Balipara Foundation Awards was launched in 2013 to support grassroot conservationists of the Eastern Himalayas, by highlighting their work and thereby encouraging others to follow their path.

WWF-India introduced the concept of Community Conserved Area (CCA) model in 2007, with the declaration of the first CCA covering an area of 30 sq km in Thembang village in West Kameng district of Arunachal Pradesh. CCA is a community-driven approach to secure natural resources in community-owned land. Presently, the CCA in Thembang manages and protects a forest area of 635 sq. km.

This model of Thembang was adopted by villages of Lumpo and Muchat in the Zemithang valley, and they in turn inspired the villagers of Kharman and Kyalegteng, who sought WWF-India’s support towards demarcating an 85 sq km forest as PLACCA in 2011. Today, PLACCA comprises Panchayat members, village elders and youth who work for conservation and management of their forests, thereby securing the habitat of endangered red pandas, musk deer, serow, goral, Himalayan black bears, Siberian weasels, leopards and wild dogs.

The Pangchen Lakhar forests have long been plagued by  uncontrolled hunting and other developmental pressures. However, after the initiation of regular patrolling and monitoring measures, the PLACCA has now managed to restrict and bring these under some control. .  A patrolling team comprising  members of the local communities, regularly collect and compile information on wildlife sightings, habitat description, sacred grooves, water sources and threats in the area thereby creating a vital database of species and threats in the area.

The committee has also been encouraging viable agricultural practices, as well as put into practice some pilot mitigation techniques to combat human-wildlife conflict. It also promotes community-based tourism and has set up an enterprise for making traditional Tibetan incense sticks as steps to boost incomes and promote sustainable livelihood practices. 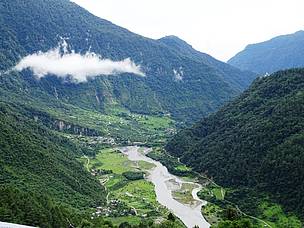 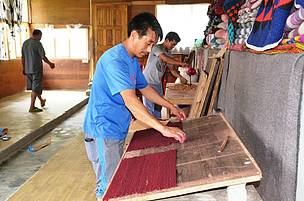