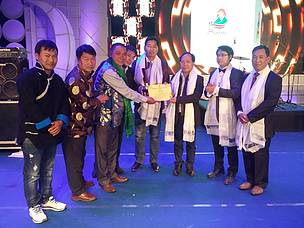 TBCCA MC Receives Best Ecotourism Award 2017
© WWF-India
The Thembang Bapu CCA Management Committee has been conferred with the Best Ecotourism Project of the Year 2017. The award was bestowed by the Department of Tourism, Government of Arunachal Pradesh during an award ceremony organised in Itanagar on 31 January, 2017. The award ceremony was graced by His Excellency, the Governor of Arunachal Pradesh, Shri PB Acharya, along with other eminent guests including John Abraham – brand ambassador for Arunachal Pradesh Tourism.

Every year, the State Tourism Department of Arunachal Pradesh announces around 17 awards under various categories in a bid to promote the state as one of the best tourism destinations of the country.

Assessments revealed that community-based tourism (CBT) was a promising livelihood option that would encourage conservation actions. Thereafter, efforts were made to develop a CBT plan and train the community in its execution.. Currently in its eight year, the Thembang CBT programme comprises four home-stay units (for a maximum of 10 tourists , home restaurants, a cultural troupe to showcase Monpa art and culture, organized treks through the CCA and the availability of trained service providers (guides, cooks, porters, etc). The community has sought to include as many families as possible so as to ensure equitable distribution of benefits from the programme. In the financial year 2015-16, the TBCCA CBT earned an approximate revenue of INR 15 lakh.

The local community in Thembang has also initiated a process to notify one third of TBCCA as Community Reserve (CR) under the provision of the Indian Wildlife (Protection) Act, 1972 (amendment 2006). The CR notification will legitimize the protection mechanism of community forests.

WWF India’s association with Thembang Bapu CCA is more than a decade old. It has been working with the local communities in the Western Arunachal Landscape since 2002.  In 2004, WWF India ideated the concept of the Community Conserved Area Model with Thembang village being declared as the first CCA in West Kameng district covering an area of 30 sq km. Thereafter, WWF India helped them form the Thembang Bapu CCA (TBCCA) Management Committee and trained the members in management of the CCA.

WWF India believes that this recognition in the form of the state award for best ecotourism project will boost the morale of the committee and the villagers of Thembang in particular, to participate in more conservation efforts in the days to come.