A unique encounter with the ruddy shelduck 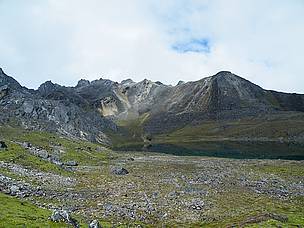 Tsomgo Ama Wetland, West Kameng District, Arunachal Pradesh
© Kripaljyoti Mazumdar/WWF-India
To put it simply Arunachal Pradesh is a paradise for birdwatchers. More than 500 birds have been recorded in the state! Of these, 21 species are considered to be endemic to the state and therefore are found nowhere else. Significant finds such as the discovery of Bugun liocichla (Liocichla bugunorum), a new species belonging to the Asian babbler family, near Eaglenest Wildlife Sanctuary attest to the status of Arunachal Pradesh as a haven for birds.

Arunachal Pradesh is also home to many high altitude wetlands that play a critical role in maintaining the ecological balance by acting as a buffer between glacial melt waters and outflows to smaller rivers and streams. The local Monpa people consider most of these wetlands sacred. These wetlands also harbor a rich biodiversity. However, due to the tough terrain the life found at these heights is not well documented by scientists.

WWF-India has been working in the western part of Arunachal Pradesh known as the Western Arunachal Landscape (WAL) since 2002 with the local communities and government agencies for conservation of biodiversity. WWF-India, jointly with the local villagers, initiated field surveys across the West Kameng district within WAL as part of the initiative to document the biodiversity of the Thembang Bapu Community Conserved Area (CCA).

The Tsomgo Ama wetland, located at an altitude of 4535 m, is one such wetland present in the higher reaches of Thembang Bapu CCA. During a field visit to the wetland, as part of the above surveys, WWF-India’s survey team consisting of Aishwarya Maheshwari, Kripaljyoti Mazumdar and Pema Wange chanced upon an interesting sight.

The Sighting
The team sighted a breeding pair of ruddy shelduck (Tadorna ferruginea) with seven chicks! The ruddy shelduck is a winter visitor to India and is known to breed in the high altitude lakes of Ladakh and Sikkim. However, it has been previously unreported from the Tsomgo Ama wetland so this sighting could indicate a potential new breeding site.

Kripaljyoti Mazumdar, Project Officer, WWF-India WAL Office, adds, “Not much is known about the breeding ecology of this species in the high altitude wetlands of western Arunachal Pradesh. As many migratory birds of nearby Assam plains breed in these high altitude lakes during summer, it is important to know their population trends.”

Areas around these high altitude wetlands are used as traditional grazing grounds and are under the ownership of the local indigenous community within WAL. As the breeding period of these birds also overlaps with the summer grazing period, it is important to understand the grazing pressure in the area and to educate and undertake conservation initiatives involving local livestock grazers to reduce threats, if any.