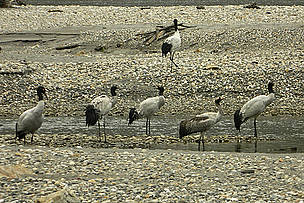 The Vulnerable* black-necked crane (Grus nigricollis) has recently been documented at Zemithang in the Western Arunachal landscape (WAL), in north east India. A flock of six adults accompanied by one juvenile was photographed by Mr. Lham Tsering and Mr. Kokte, members of WWF-India supported Pangchen Lumpo Muchat Community Conserved Area (CCA) and Pangchen Lakhar CCA while the birds were wintering in the area in December 2011. It must be noted that in mid Novermber 2010 at Pangchen Valley of Zemithang, in the north western corner of Arunachal Pradesh, sharing borders with China on the north and Bhutan on the west, three black-necked cranes were sighted.

The black necked cranes are found in India, China and Bhutan and breed in the high altitude wetlands in the Tibetan plateau at elevations of 2950-4900 m above mean sea level. India’s eastern Ladakh is one of the known breeding grounds of this species. A small wintering population is also found in Sangti valley of Arunachal Pradesh in India.

According to Dr. Pijush Dutta, Landscape Coordinator, WAL, WWF-India “One individual was a year old juvenile for which this might perhaps be its first wintering flight after breeding. In India, although wintering of these cranes has been reported in the past from the Apatani Valley (Lower Subansiri district) and Papoo Valley (East Kameng district) in Arunachal Pradesh and Moinabari Forest and Buxa Tiger Reserve in northern West Bengal, Sangti valley and now Pangchen Valley are perhaps the only wintering sites where they still visit every year.”

For the past one decade, WWF-India has been supporting the forest, environment and wildlife agencies of Governments of Jammu and Kashmir, Sikkim and Arunachal Pradesh to conserve the high altitude wetlands of the Himalayas. As part of this, WWF-India’s field office in Arunachal Pradesh is working for the conservation of the small wintering population in the state.

Adds Pijush, “The villagers of Pangchen Valley have been actively working to conserve rare wildlife found in the area which includes red panda, Himalayan black bear, musk deer and the leopard, with support from WWF-India. There are two Community Conserved Area here – Pangchen Lumpo Muchat (98sq.km) and Pangchen Lakhar (85sq.km) which have been demarcated by villagers for conservation of rare flora and fauna of the area. In the valley there is a religious ban on any kind of hunting. The documentation of black-necked crane this year by villagers is a part of their effort to conserve and document the rich biodiversity of the area. Last year three of these cranes were reported from this area and hence the increase in their numbers this year is very encouraging for the species which is under serious threat. Presence of this crane also enhances economic benefit to the villagers from community based tourism activities initiated by the villagers, presently with support from WWF-India.”

First made known to science in 1876 from North Eastern Tibet the black-necked crane was reported in India from Ladakh in 1919 by F. Ludlow. Due to the difficulty in accessing its habitat in India, research and surveys on this species have mainly taken place only in the past three decades. The International Union for Conservation of Nature (IUCN) has categorized the bird as Vulnerable and under the Wildlife Protection Act, 1972, the bird is listed under Schedule 1. The bird has been given the status of the State Bird of Jammu and Kashmir.

The major threat to the wintering habitat of this species is mainly due to road construction activities which is under progress along both sides of the river. However, as these roads are crucial for India’s security, there is an urgent need to find out a middle path that will ensure the safety of the cranes’ habitat while ensuring the road construction does not stop. 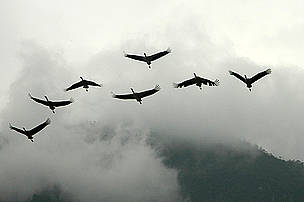