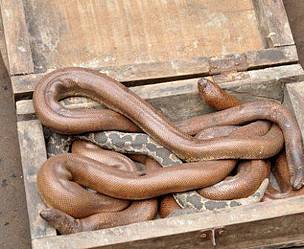 Red Sand Boa
© Abrar Ahmed
New Delhi: Red Sand Boa Eryx johnii, commonly called the ‘double-headed snake’ due to its blunt tail that resembles its head, is reported to be one of the most traded reptiles in India today. In recent years there have been reports claiming an upsurge in demand for Red Sand Boas across the domestic illegal markets in the country, mainly due to the new age superstitions attached to them, and an increasing quest to keep them in possession, despite this being illegal under Indian law.

To highlight this, TRAFFIC’s India Office with support from WWF-India has launched an online campaign for raising awareness about the illegal trade of Red Sand Boa in the country. The key message “Owning is Stealing” aims to enlighten wildlife consumers that not every animal belongs in their home and urging them to not buy protected wildlife species as pets as their actions can have an adverse impact on the wild populations of the species.

Dr Saket Badola, Head of TRAFFIC’s India office said, “Despite its important ecological role and its protection status in India, the Red Sand Boa is heavily trafficked. This illicit trade is adversely impacting wild populations, so it is therefore imperative that law enforcement agencies understand this ecologically important species better and take strides to curb the illicit trade of this snake in India.”

Since Red Sand Boa is protected under India’s Wildlife (Protection) Act, 1972 and any sale, purchase or possession of the species is a punishable offence.

The Red Sand Boa, like any other snake species, is important for our ecosystem. It helps in maintaining a healthy population between prey and the predator. It feeds mostly on rodents, lizards, and even other snakes.

Dr Badola added: “We need to rethink our relationship with the Red Sand Boa. It has countless benefits when it remains in the wild – playing an important ecological role that also supports farmers by reducing crop damages by rodents.”

With this campaign, TRAFFIC is also releasing a new factsheet[1] on Red Sand Boa to help people understand the species, its role in the ecosystem, its protection status and the threats it faces due to illegal wildlife trade. You can download this at https://join.wwfindia.org/illegal-wildlife-trafficking/

About the campaign:
The new online campaign has been launched by TRAFFIC, India office and WWF-India to create awareness about various wildlife species that do not get the deserved conservation attention but are heavily poached and trafficked. In the coming weeks, TRAFFIC and WWF-India will use this opportunity to feature five such species viz., otters, seahorses, red sand boa, Tokay Gecko and monitor lizard. The campaign is live on FACEBOOK and TWITTER.