Online campaign urges people not to buy, eat, wear or own protected wildlife species and their products | WWF India

Online campaign urges people not to buy, eat, wear or own protected wildlife species and their products 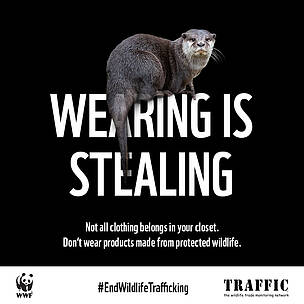 Otters Lutrinae, Red Sand Boas Eryx johnii, Monitor Lizards Varanus, Seahorses Hippocampus and Tokay Geckos Gekko gecko – are often extracted from their natural habitat to be sold as curios, pets or for the aquaria trade. Their body parts and derivatives are used for clothing, food or medicine, despite these species being protected under India’s Wildlife (Protection) Act, 1972 that prohibits their sale and trade.

Mr Ravi Singh, Secretary General and CEO, WWF India said, “Awareness and sensitisation is a first step towards change. Through our campaigns we endeavour to bring to the forefront issues relating to illegal wildlife trade in India and how conservation and environment friendly individual choices can go a long way in securing the future of wildlife.”

The overall campaign message indicates that illegal possession or consumption of protected wildlife or the products made from them is similar to ‘stealing’ a highly valuable article.

The first campaign message “Wearing is Stealing” informs people that products made from otters’ fur and other body parts, are prohibited for sale and purchase in India, and any kind of indulgence can lead to imprisonment, a fine or both.  It reminds about the important role played by otters in maintaining the nutrient cycle of the ecosystem. TRAFFIC’s studies have found all three otter species found in India - Eurasian Otter Lutra lutra, Smooth-coated Otter Lutrogale perspicillata and Small-clawed Otter Aonyx cinereus- being traded illegally.

The second campaign message “Owning is Stealing” enlightens people that not every animal belongs in their home; urging them to not keep species like Red Sand Boa and other protected wildlife as pets. Red Sand Boa, like any other snake species, is important for our ecosystem as it helps in maintaining a healthy population between prey and the predator. In recent years, there have been reports claiming an upsurge in demand for Red Sand Boas across the domestic illegal markets in the country, mainly due to the new-age superstitions attached to them.

The third campaign message “Possessing is Stealing” highlights the plight of protected marine animals such as seahorses and others in aquarium trade. It informs people that seahorses don’t belong in their aquarium and urges them to not buy such species as their purchase will have a detrimental impact on the wild populations. Seizure reports indicate that seahorses are victims of large-scale curios and aquaria trade in India. Live wild-caught seahorses are traded to aquariums from all over the world, whereas dead seahorses are used as ingredients in traditional medicines, used to make jewellery, key chains and other souvenirs. Seahorses are flagship species of their habitats, and in the marine food chain, they play an indispensable role of predating on bottom-dwelling organisms and small shrimps.

The fourth campaign message “Eating is stealing” aims to enlighten people that species like monitor lizards and other protected wild animals should not be killed for food, urging the public against buying or consuming protected wildlife species. Reports show that monitor lizards are extensively poached for meat in the country being considered a delicacy and also believed to have medicinal properties. They are also targeted for their copulatory organs (male's hemipenes) that is structurally similar to “Hatha Jodi" the root of the Tiger's Claw Martynia annua; a plant with diverse traditional uses in Ayurveda. Monitor lizards are essential to agricultural and forest ecosystems as they feast on insects, rodents, bird eggs, snakes, fish, and crabs, thereby regulating their populations. They also clear carrion and help in controlling the spread of disease.

The fifth campaign message of “Buying is Stealing” warns people against buying medicines and other products made from Tokay Gecko and other protected wildlife species. Tokay Geckos are heavily exploited for their use in traditional Asian medicines, especially to meet the demand for their internal organs, meat and tongues, used as a perceived cure for various ailments. In 2009, poaching and illegal trade of Tokay Geckos rose sharply after the tongue and internal organs began to be targeted as a potential, though unproven, remedy for Human Immunodeficiency Virus (HIV) and cancer. Tokay Gecko play an essential role in the ecosystem and consume species that are the vectors of human diseases such as mosquitoes and flies or are regarded as pests such as cockroaches and termites.

Dr Saket Badola, Head of TRAFFIC India said, “Uncontrolled illegal wildlife trade has the potential to result in wiping out of several wildlife species from their natural habitat that in turn can disturb or completely destroy the intricate balance of nature. Unless enforcement initiatives are tightened to clip this growing menace coupled with effective and timely awareness generating programmes, it will be impossible to end wildlife crime.”

The online campaign to #EndWildlifeTrafficking has been running on TRAFFIC and WWF-India social media handles such as FACEBOOK, TWITTER and INSTAGRAM.  Also released during the campaign our interesting factsheets on these five wildlife species that can be downloaded at https://join.wwfindia.org/illegal-wildlife-trafficking/ .

About the campaign:
The new online campaign has been launched by TRAFFIC, India office and WWF-India to create awareness about various wildlife species that do not get the deserved conservation attention but are heavily poached and trafficked. In the coming weeks, TRAFFIC and WWF-India will use this opportunity to feature five such species viz., otters, seahorses, red sand boa, Tokay Gecko and monitor lizard. The campaign is live on FACEBOOK and TWITTER. 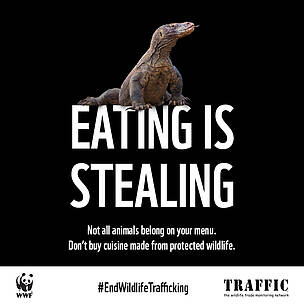 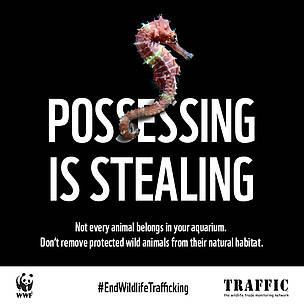 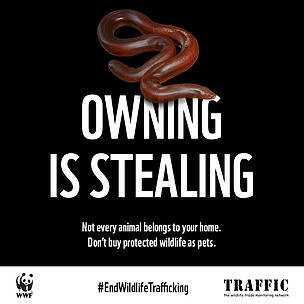 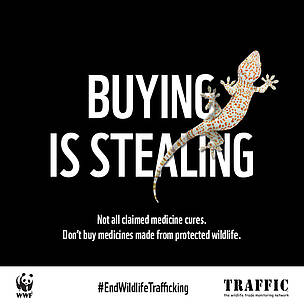