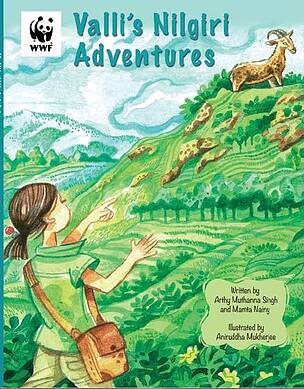 Chennai: The first of its kind comic book, authored by Arthy Muthanna Singh and Mamta Nainy, exclusively on the lesser-known species of the Nilgiris, was launched today by World Wide Fund for Nature-India (WWF India). The Nilgiri Tahr is the only mountain ungulate in southern India amongst the 12 species present in the country. A large part of the population has depleted from its historical range, and the existing population is under severe stress due to habitat loss and hunting.

“Valli’s Nilgiri Adventures” is an engaging comic book with colourful illustrations and a captivating storyline to garner the interests of children. Valli, the main character of a school-going girl, visits the Nilgiri’s on an education trip with her classmates. The book vividly brings to life the experiences she gains in the forests, sighting wildlife, including the elusive Nilgiri Tahr (state animal of Tamil Nadu). The book launch is part of WWF India’s year-long campaign to raise awareness among children, youth and the general public about the Nilgiri Tahr.

Arthy Muthanna Singh, author of the book, shared her experience, "When WWF India first briefed us about co-authoring a book on the Nilgiris, with a focus on the state animal of Tamil Nadu, the Nilgiri Tahr, I was over the moon with excitement. To co-author, a book about the same region where I had grown up as a child was a dream come true! So Valli’s Nilgiri Adventures traces many parts of my childhood – the Todas, the Ooty chocolates, the treks up the Blue hills, the wildlife that was such an important part of who I am today.”

“We have tried to give our young, impressionable readers a true feel of the wonderful Nilgiris – the wildlife, the forests, the clean air, the tea gardens, the famous Ooty chocolates, etc. We were lucky to have Aniruddha Mukherjee as the illustrator. He made the book extra-special with his vivid water-colour renditions,” said Mamta Nainy, the co-author of the comic book.

The comic which will be available both in English and Tamil was launched today by the Chess Grandmaster and WWF India’s Environment Education Ambassador, Mr. Viswanathan Anand and, Ms. Madhura Visweswaran, Tamil Nadu Philanthropy Ambassador, WWF India.

“I take immense pleasure in being associated with WWF India and launching the book. Making the younger generation more aware and mindful of their surroundings and nature is the best way to conserve it. I hope the book will inspire many children, as future citizens, to care for nature,” said Viswanathan Anand.

"As an educationist, I believe children are shaped into better citizens at schools, and books play a major role in transforming the personality of children. I appreciate WWF India and the authors for coming up with an appealing book that talks about the Nilgiri Tahr in a fascinating way,” said Madhura Visweswaran.

In his keynote address, Mr. Shekhar Kumar Niraj, IFS, Principal Chief Conservator of Forests and Chief Wildlife Warden, highlighting the importance of conserving the Nilgiri Tahr said,"Conserving the Tahr is also conserving the pristine shola-grassland ecosystem. The Mukurthi National Park is a unique protected ecosystem created to conserve the grasslands and the Tahr. The government is keen on protecting the iconic species of Tamil Nadu, and I am happy to see the support for the Tahr in terms of the book and the celebrity ambassadors who have lent their voice for its conservation.”

Mr. Karan Bhalla, COO, WWF India part of the launch event said, “It is very important to inculcate reading habit among children as it helps build imagination, language skills and story-telling skills. WWF has been working on environment education for a long time as we believe educating and engaging our children through books and activities will help them take necessary action for the environment.”

WWF India initiated its conservation work on Nilgiri Tahr in 2008. In 2012, an assessment on Nilgiri Tahr's status, threats faced, habitat, and population size was initiated in the Western Ghats. WWF India published a report on the comprehensive study of the Nilgiri Tahr population and its habitat in the hills of Tamil Nadu and Kerala in 2015. It was the first time such a comprehensive report was prepared. WWF India continues to undertake regular surveys in the upper reaches of Sholas and grasslands in the Western Ghats. It works in close collaboration with the Kerala and Tamil Nadu Forest Departments.

About the Authors
Arthy Muthanna Singh and Mamta Nainy are Founder-Partners of SYLLABLES27, an independent publishing venture started in late 2018, which primarily produces books for children up to the age of fourteen on a turn-key basis for various publishers and organizations that work with children. They have completed twenty-seven books, of which Valli’s Nilgiri Adventures, published by WWF India, is the latest.

About WWF India
WWF India is committed to creating and demonstrating practical solutions that help conserve India's ecosystems and rich biodiversity. With more than 50 years of conservation journey in the country, WWF India works towards finding science-based and sustainable solutions to address challenges at the interface of development and conservation. WWF India is part of the WWF network, with offices in over 100 countries across the world. WWF India works in many states of India, through our state and field offices. The organisation works in different geographical regions and across thematic areas, including the conservation of key wildlife species and their habitats, management of rivers, wetlands and their ecosystems. On the sustainability side, the focus areas are climate change adaptation, driving sustainable solutions for business and agriculture and empowering local communities as stewards of conservation. We also work in combatting illegal wildlife trade and in bringing environment education to students through outreach and awareness campaigns. http://www.wwfindia.org
Facebook, Twitter, Instagram