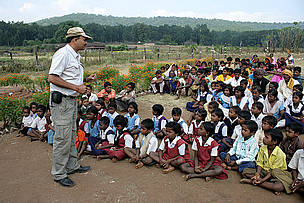 Background:
Pardis are a nomadic tribe of Central India who are traditional hunters and make a living by killing wild animals. They are thought to be behind many poaching incidents in and around Madhya Pradesh’s Panna Tiger Reserve (TR) in the recent past. WWF-India has supported Panna since 2003 when winter jackets were distributed among the staff. This has continued in the form of small support like wireless handsets, solar panels, remote surveillance systems as well as large support in the from of a tractor, truck and recently, vehicles. Along with this support, rehabilitation of Pardis into mainstream society is critical for the survival of wildlife not only in Madhya Pradesh but also in many other parks across the nation. WWF-India has been closely working with Government agencies to provide education to children of Pardis.

Engaging Pardhi children:
Two batches of ‘Residential Bridge Courses’ (RBC) are being currently conducted in association with the State Forest Department under the Government supported ‘Sarva Shiksha Abyiyaan’ (‘Education for all’ scheme). By completing a 9-month bridge course, the kids are enrolled into formal education. For example, after completion of the first RBC started in November 2007 by the Forest Department, sixty four boys and forty four girls were admitted to Grade 1, 2 and 3 classes in the tribal schools at Dhangad and Indrapuri colony respectively, in Panna District. This was done on the basis of individual assessment of these students.

Inderbhan Singh Bundela has been working with WWF-India for these kids around Panna TR since August 2008. According to him, “Three batches have been enrolled at the Pardhi School in three years. There are about thirteen girls and fifteen boys in the second course which is currently running. While the first two batches were mainly from Panna District, the third one is from Katni. The children’s age is between eight to fourteen years and in some cases there are even six-year olds”. He says, he is very attached to these kids and their innocence makes one ask if these people really poach wildlife. He further adds “It’s a question of motivation and once they are guided in the right direction, they should be as good a people as any other in the society.”

Concerted efforts are being made to build capacity as well as sensitise the teachers and care takers at the schools for Pardi kids. The knowledge these kids have on their natural surroundings is also being recognized and acknowledged through workshops in Panna TR.

Eyewitness accounts:
Here are stories of two Pardhi children whose lives have changed due to the above interventions.

Bamina, Nine years
(She is from the 1st Batch of RBC)
“My name is Bamina. My father’s name is Daryami. I’ve done the nine-month Residential Bridge Course (RBC). I’ve been studying in the school in Kunjwan for the past 2 years. Before I started schooling I used to stay at home though I never liked that. My father and mother used to roam around a lot to provide us food. Even then, we had to go hungry many a time. Sometimes, we even had to stay back in jungles. But that has changed now. I like it here in school. We play a lot of games and also study. I’m learning many new things. My three brothers study at Dhanghad. I’ve three elder sisters who are not in school.”

“I now ask my parents not to hunt. They used to hunt wildlife like tigers, birds and wild boars. Now, my friends and I are educating them about the importance of not hunting wild animals. They now sell Kesar.”

Chiranga, Eleven years, 3rd Batch of RBC
“My name is Chiranga. My father’s name is Parwat Singh. Before I started going to the government school I lived with my family and helped my mother in cooking. I’ve three sisters and three brothers. When I was brought to school for the first time, unlike the other children I never cried. I lived in the school for two months.”

“My father used to shoot wild boar earlier. Members of my family used to hunt tigers and partridges. But now they no longer hunt. My mother now sells ‘manihari’ (traditional cosmetics) like bindis, kumkum and traditional medicines, while my father sells ‘rudraksha’ beads (talismans).”

A story of change for good
According to Dr. Diwakar Sharma, Associate Director of WWF-India’s Species Programme, it took 2 years of continuous encouragement to get Chiranga into school. He says “After her, many more children came forward and joined the school. Once they join the school they do not want to return to their old lifestyle that was filled with hardship and poverty. They are now filled with a desire to learn, succeed and get out of the vicious cycle of poverty that has crippled the lives of their parents. The children joining schools has also led to many of their parents giving up hunting of wild animals thereby aiding wildlife conservation. Success stories like those of Bamina and Chiranga are being used to inspire more Pardi children and families to give education a chance.”

Says, Mita Goswami, Director, Environment Education, WWF-India, “These children are bright and energetic. I am amazed at their aptitude to learn. They are a treasure trove of information on our wildlife. During the nature walk we had with them, we were pleasantly taken aback by the wealth of knowledge they had on nature; from insects to trees and birds to mammals.”

Sangita Saxena, State Director, WWF-India, M.P. & Chhattisgarh State, informs that the project is aimed at developing Pardhi children educationally, socially, culturally and economically, in order to make them forgo their traditional livelihood. She says, “They have an inborn quality to learn fast apart from hunting skills. When they grow up their in-depth knowledge about wild flora and fauna can develop them into excellent nature guides, nature interpreters or researchers. Their skills can also be utilised in law & order services, sports and in the entertainment world as they are also good at dance, folk singing and artisanship. These legally sustainable vocations will convince their parents to lead a settled life.” She adds, “WWF-India is planning to support similar initiatives in Katni, Itarsi and Seoni districts of Madhya Pradesh. A reformed life for children of hunter communities is our Motto.”

Children like these need a chance to change their lives for the better. And WWF-India along with the Madhya Pradesh Government agencies like Forest Department is helping them do it through creative engagement and formal education. By turning the children of Pardis away from hunting, we are giving our nation’s wildlife a good chance to flourish. 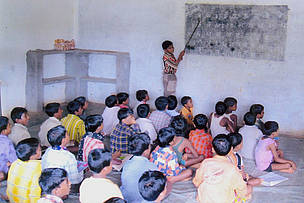 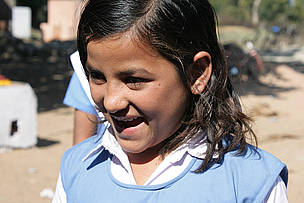 Bamina: “I like it here in the school’’
© Diwakar Sharma/WWF-India Enlarge 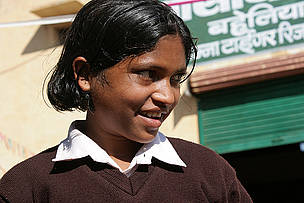